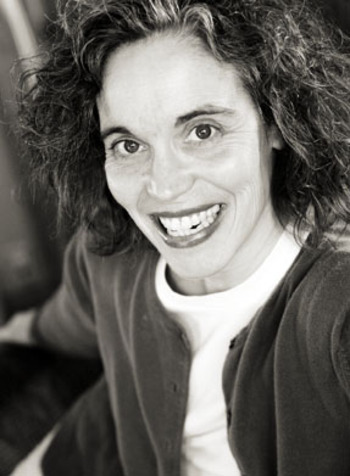 My friend and neighbor Mary Crozier-Sauer died on Oct. 27, 2006, following a long battle with melanoma. I wanted to tell you about her, though I am in no way an authority on her entire life but I will tell you what I know, and what I learned this past fall.

I have known Mary and her family for more than 10 years. We are neighbors. We saw each other at the neighborhood rec centers, and at our bi-annual dinners, that include four neighborhood couples or, just in passing on the street or at the bus stop.  She was smart, and funny, and cool, and beautiful. She gave me shit quite frequently for playing up my role as the neighborhood introvert. She coined the term, “cathy sightings” for the times I would actually leave my house and make nice with other neighbors. She once took a photo of me (that was completely staged, mind you) of me, crossing the street, shielding my face with my jacket like a celebrity fending off the paparazzi. As I said, she was funny.

I didn’t know enough about her, though. I realize that now. She was one of those people who was just good. Socially conscious, politically-involved…she worked tirelessly as an advocate for children, and was directly responsible for helping families create new lives through adoption. I didn’t really know that at the time. I just knew she did important work. She was a good, good mother. And a loving and devoted wife.

Years earlier, she had cancer, and had it removed. And moved on with her life. When it came back, the news filtered through the neighborhood…reaching me through a phone call. I was devastated. Me. And what right did I have to be? I wasn’t family. I wasn’t a close friend. I was a neighbor. Just a nice neighbor down the street who kept to myself more than I ought to have. But nevertheless…I was devastated by the news. Because she was just like me.

40 years old. A mother of two. A wife. A sister. A friend. A Democrat. A woman who liked Green Day. Funny. Smart. Beautiful. Passionate.

And I also think, very, very brave. Which is where she and I differed.

I prayed a lot, at night, and during the day. I felt like, if anyone was going to beat this, it would be her. She was one of the good people. You know…the sort that the world needs to keep around. People needed her. End of story.

Time passed, and after some more experimental treatments produced mixed results, she chose a course of chemotherapy. Before she began treatment, she was planning to cut  her hair short, to minimize the shock to her boys, 11 and 14, of seeing their mom lose her hair. She called me up to ask if I would take some shots of her—do a little casual photoshoot on a day when she was feeling like she looking good by all terms, not just as someone fighting cancer, but as the woman she was.

The shots were awesome. She was gorgeous. And funny. And she kept telling me she felt stupid, but she trusted me. But I don’t remember what else we talked about. I know we talked about her treatment. And how she was feeling. But honestly, she wasn’t the complaining sort, and her optimism is the only thing that stands out. That, and how funny she was about looking silly in the shots.

But we did talk about blogging. I told her, “You should do it…if you’re not working, you might just want something different to do, and it doesn’t have to be a blow-by-blow account of chemotherapy.”

Mary’s blog is called Benvenuto!. Or, “beginnings.” And she used it to write. A little here. A little there. Daily life. Memories of growing up. Random bits. Ordinary pieces. Occasionally, she wrote about cancer. Occasionally. It became a sort of life journal. I thought it was so cool that she was doing it. I knew that once or twice, she  had dabbled in a little Creative Memories scrapbooking, but that she wasn’t the scrapbooking type necessarily. And yet, by blogging, she found a simple way to record…time. And memory.

I loved that she signed off most entries with… “more later…”  It still makes me smile, because I believe that is always going to be true.

Life went on throughout the summer. And into fall. I didn’t see her as much. But I don’t always get out. It’s that neighborhood introvert thing at work. We had talked about getting together for coffee. To this day, I don’t know why I never stepped out, and made the effort…made the date. Just to hang out. Maybe it was partly out of fear. Fear of not saying the right thing. Fear of seeing someone just like me in the fight of her life. I’m ashamed, actually, to say that. But I’m certain there was a part of that at work.

In September, the four neighborhood couples got together for one of our annual dinners. It felt normal. And good. We were all there. Mary, as it turned out, had not lost all her hair. I thought she looked really good with short hair. It was her. Totally. We ate. We talked. 8 adults doing what they do. That sort of thing. But that was the last time I talked to Mary. The last time.

When she went into the hospital, I thought she’d be okay. When you’re a neighbor, on the periphery, you think like that. You hope and pray like that.

Mary died early on the morning of Oct. 27, 2006, surrounded by her family and closest friends, at home, enveloped by immeasurable love. At peace. Her husband, Jon, shared the story with me later on that day, in his kitchen, in their home. I felt it was almost a gift to be included there. In fact, I’m certain that it was.

In the two days that followed, I pulled down every entry and photo from her blog, and compiled a document to give to her family. One copy turned into six copies, and then into six more copies. For brothers. And sisters. It was a complete and total privilege to be able to give them that. I felt honored to be included in the very early stages of their grieving.

One of the photos I took of her from that early spring day sat near her casket. That was a photo I never planned would be part of this process. Never. And yet there she was, in that photo. Beautiful. Radiant. Hoping she didn’t look dumb.

This seems pale to say that during this process, I learned the value of recording a bit of your life. But I saw how  her words meant and mean so much to her family and friends. It spoke to me so, so deeply. The value of recording stuff about you, and your perspective on this spinning world.

At the funeral, one of Mary’s eulogist’s read this well-known quote by Marianne Williamson:

Our deepest fear is not that we are inadequate. Our deepest fear is that we are powerful beyond measure. It is our light, not our darkness that most frightens us. We ask ourselves, Who am I to be brilliant, gorgeous, talented, fabulous? Actually, who are you not to be? You are a child of God. Your playing small does not serve the world. There is nothing enlightened about shrinking so that other people won’t feel insecure around you. We are all meant to shine, as children do. We were born to make manifest the glory of God that is within us. It’s not just in some of us; it’s in everyone. And as we let our own light shine, we unconsciously give other people permission to do the same. As we are liberated from our own fear, our presence automatically liberates others.

I don’t really remember crying like that before in my life.

I know. What right did I have? I was just an observer, really. Someone on the outside. A neighbor. But then again, she was me. She is me. And the quote reminded me to not be afraid to be…brilliant, in every way that I could possibly be.

I just wanted to write about this amazing woman that lived on my street and affected so very many lives in so many incredible ways. And how she’s changed my view of the world indefinitely.

And to Jon and the boys and Mary’s family…our love and support. We cannot rightfully imagine, but we are here. And thanks for letting us be a part of your lives.