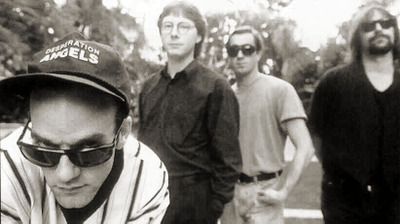 I found the simple life ain’t so simple
When I jumped out, on that road
I got no love, no love you’d call real
Ain’t got nobody, waitin’ at home
—Runnin’ with the Devil, Van Halen

I saw a comment posted about what I thought about Van Halen being inducted into the Rock and Roll Hall of Fame, and whether or not I thought Diamond Dave would show up, or Sammy, or Wolfgang, and so on…

What it made me remember was how, up until just a few years ago, I had no idea that the line in Runnin’ with the Devil was “no love you’d call real.”

Wha? You mean it’s not “no love you, Korea?” Seriously? My entire pre-teen era is now officially one big lie.

I think it’s great that Van Halen gets its due. For their debut album alone, they earned it. I read somewhere (or maybe it was Dan who said) that it “took balls to open your debut album with a guitar solo.” And yes, if you’re anywhere near my age, and you’re female, and you say, “Oh, I never air guitared to Eruption,” then it’s quite possible you are lying.

That aside, whoever marches us to the podium after being forced to listen to All American Rejects or [insert current hot rock band here] plow through an acceptable medley of VH’s greatest hits, isn’t really what’s making me happy. No. That would be the induction of R.E.M.

I have to first go on record to say this: I wasn’t down with the Athens boys from the get go. Not even close. I clearly recall driving from the U District to Capitol Hill, during my Freshman year at the University of Washington, blasting KJET on my a.m. dial, hoping to hear “Boy” by Book of Love just one more time, but hearing instead “Pretty Persuasion” and thinking, “What the hell is this country new wave shit?” (Oh, and Mom, if you are reading, I can say ‘shit’. I’m 40.)

Much like I don’t get the Black Eyed Peas today, I didn’t get R.E.M. then—at all. Truthfully, I wasn’t that cool. And really, it wasn’t until Life’s Rich Pageant came out that I even bothered to try. When you’re listening to Bauhaus during most of your waking hours, R.E.M.’s southern understatement is no match for a heavily eye-lined obsession with Pete Murphy and all things gothic.

But, in 1986, right before I left my beloved Seattle for good, and based solely on my mild interest in the song “Fall on Me,” I picked up the cassette of Life’s Rich Pageant, and tucked it into my brown tape case that was plastered with Bauhaus, Japan and Joy Division* stickers, to be pulled out later in a much hotter, and Southern environment. Turns out, that’s exactly what the missing link was: humidity.

* I never once actually listened to a Joy Division album, I just like their stickers and hoped people would think I did like them. Way, way too dark, even for a Bauhaus fan.

I think to appreciate R.E.M., you need roughly 70 percent humidity to properly get into that Athens state of mind. Living in Texas helps. When you can see for miles on end. And there’s kudzu-like scrub brush lining the highway. And you’re 19 and ushering in a whole different kind of angst and introspection that doesn’t involve wearing black. And you play Perfect Circle over and over and over again. Then it starts to click.

I’m no music critic, but to me, R.E.M. is one of those bands, like U2, who took their influences and forged a sound that became their own, and continued and continues, to evolve. I remember how Green made them one of the biggest bands in the world, when pop radio suddenly was ready for them. I mean, how could you not like Shiny, Happy People? And they just kept putting out great music.

Like At My Most Beautiful from the Up album. Dan and I love the line, “You always say your name, like I wouldn’t know it’s you.” (See an AOL Sessions performance here.)

I got to see them a few times in concert. I think Michael Stipe is a much better singer than he ever gets credit for. Dude is brilliant. Completely. And I love his angular, bald head. I also love that he came out of the closet, too. But that’s another whole story.

So today, I nod to Van Halen for being a soundtrack to a lot of stuff I know for a fact I should not have being doing, but today, I’m reminiscing with R.E.M.

Because I am…I am superman and I know what’s happening.