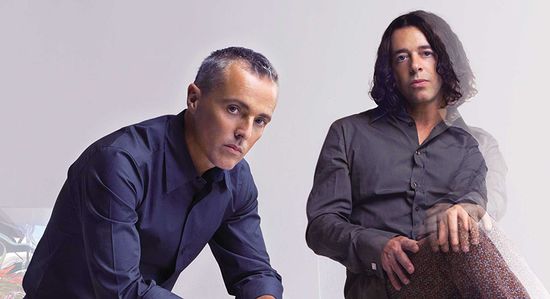 In the category of Going against the obvious choice, (much like my preference for Grieco over Depp, which actually was period related, in that, i'm no fool in 2007—I'd choose Depp) i was a Roland (yes, look right) girl.

Deciding I needed to take a break from searching YouTube for every obscure Neil Finn-related clip I could unearth, I was looking over Celebrity Playlists on iTunes because my friend Lisa McG (fellow musically obsessed soul mate and all around rad chick) told me to check out John Cusack's list. Which got me lost in celeb lists, looking for, you guessed it: those who liked Neil.

Only ONE band had a single Neil song: Death Cab for Cutie. Nice.

But while looking, someone (and i can't remember which fabulous celebrity it was) listed a song by Tears for Fears, Woman in Chains (see link on my new link list), and that got me to search my own iTunes library, to listen to a band that, for a time, was my favorite band in the world.

I really believe if they hadn't broken up, (from their original form) they would have continued to take over the planet. Although I personally loved the TFF albums without Curt. Because I am a Roland girl.

Why? Because when he sings, he means it. That's really all it takes for me to get hooked. If they mean it. That's why i'm breaking my usual pattern of NOT listening to female artists and putting Brandi Carlile on from time to time. She bloody MEANS it when she sings.

I actually saw TFF on their comeback tour a few years back. New album is actually good. So was the show. But it's not like Neil love or anything.

I had the WORST dream last night. I was going to the concert….(remember, front row seats?) and i got there, and realized they never sent my tickets. And the show was starting. After FREAKING out and crying to the ticket window people, i realized that i did, in fact, have the tix in my purse, and i ran to the front, where Pete Yorn had already started, except that he wasn't playing. He was sitting next to a man on the stage, who was lying on his back, and Pete was covering him with moss…

then i woke up.

What the hell does THAT mean?

And my arm…not going to be talking about that either. I'm focusing on the positive. And, heading to Utah for a week, next week. So…next posting will occur from the beautiful Salt Lake area…