What is it with men making their mixes anyway?

Many moons ago, Dan wooed me with mixed tapes. Sigh. Those were the days. When they consisted of a collection of painstakingly chosen songs gathered together on an actual cassette tape. I still remember the first mixed tape  I ever got from him. The third or fourth track in was "Blind Love" by Tom Waits. If I'd had any doubts up until that point that he liked me, well… track 4 pretty much put those fears to rest.

Over the years, he's continued to make mixes for me, although the modern ones now show up on shiny CDs, and usually around special holidays, like Valentine's Day. Or Arbor Day.

One year, my Valentine's mix started with Barry White and ended with Ben Folds' "The Luckiest" and left me in a sobbing heap at my computer, where I sat and listened while toiling away at my job. Although I surely felt loved.

He still makes mixes, but not just for me. I love that he makes mixes for other people, including, but not limited to: himself, his friend, Christopher, and our kids.

His latest mix is called "Alphabet." Yes, as you would guess… song titles covering A to Z. Take a peek: 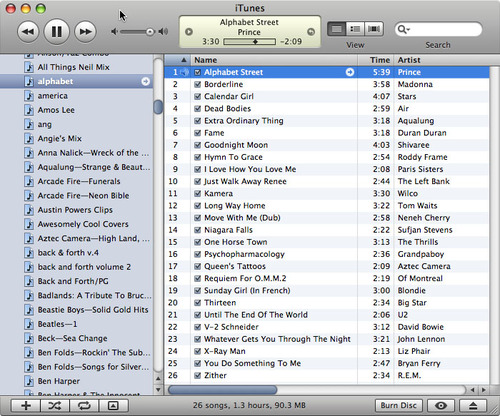 It's harder than it looks. I thought the only song we had that started with "X" was by Madonner.

I've been promising Dan that I'll listen to it during the day, and I've meant well enough. It seems I'll start it, and about half way through the Roddy Frame contribution, I'll be damned if Neil doesn't win out and I clamor for my Finn fix. So much for the Alphabet mix.

I told him there really were a lot of Finn-related songs he could have chosen that would have added so much to this collection of his. Probably one for each letter. Except X. And possibly Z. Okay, so it might be a stretch to cover the entire alphabet in Finn, but I think I just planned my weekend, people.

I love when that happens so early in the week!

But in the spirit of mixes everywhere, I challenge you to make your own Alphabet mix. Then make a page about it. The blast it through your boom box on the street where you live and drive everyone crazy.

Then, leave your name if you want to win a copy of Dan's…and a few alphabet-related scrapbooking goodies tossed in for good measure. I'll have Dan draw a winner by tomorrow.