I delete 99 percent of the tacky junk mail that lands in my inbox, but there is always that odd one percent that causes me to take note, usually when it says something like, "Fill out this survey and a brand new iPhone will be yours!" or "Wish you had those perky boobs of yesterday?"

Or this one, which addresses a concern that is near and dear to me, because unfortunately, I sleep next to a "loud breather." 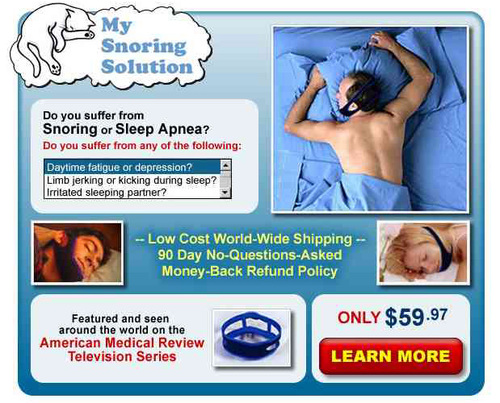 But the more I looked at it, I became increasingly more suspicious as to the REAL purpose behind My Snoring Solution. Something about the head gear apparatus was a little too country-boys-in-the-basement in that one train wreck of a scene in Pulp Fiction. You remember…when Bruce Willis' character decided to be a good egg afterall and save Ving Rhames'… ahem, butt.

So there's the first issue I'm having.

And the second is the shot on the left, which leads you in a totally different direction, suggesting that the other way to stem the problem of snoring is apparently as simple as growing an Amish beard.

It's a fine line between fetish gear and churning your own butter. That's all I'm saying.