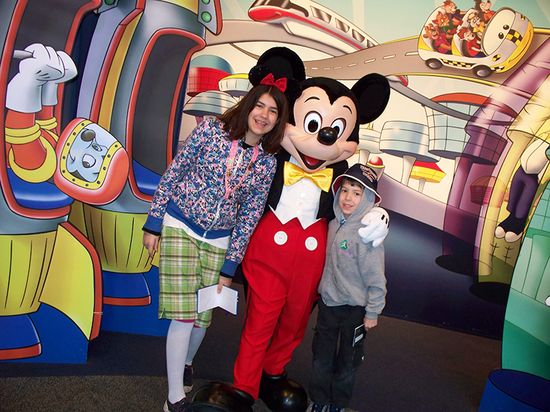 Day one. Full of excitement and operating on two measley hours of anxious sleep, we headed out on our hastily-planned yet well-earned vacation to Florida.

We kicked it off with a bang by going to the wrong airport. That should have tipped me off that there might be trouble in them there hills, but I, ever the optimist, ran through the airport with my family, our five bags, three back packs, one carry on duffel, a purse, a CKU bag packed with Dan's reading materials, and… my camera, with hope still occupying a large corner in my heart.

We had to catch the underground portion of the Light Rail system, to take us over to the OTHER airport terminal. You'd think the cabbie would have possibly paid a modicum of attention when I told him the airline. Nope. He just heard 'airport'. And there were were.

Because we always arrive two hours early, we were in no danger of missing the flight. But still… we pressed on in a hurried fashion to get to the correct location and check ourselves in.

But when we got up to get off the train (the one with the doors that close REALLY fast on you if you're not spry) I simply left my bag with my roughly 2K of camera equipment sitting quietly, all alone on the seat occupied only seconds earlier by my ever-expanding tushka.

And I didn't even realize it.

The moment i did realize it was when we were up at the ticket counter. When I confirmed with Dan that the bag was missing, I had the sensation of falling into a wide, expansive canyon, similar in size and scope to the one Evel Knievel tried jumping back in the 70s. That was me. I'd been on a rocket, and it had fizzled out horribly, and I was falling to my sure and painful death. Right there in the Hubert H. Humphrey terminal.

The strange thing was, as Dan started making calls, and Coleman started to cry, and Aidan was hugging me, I felt like I was floating above everyone, having an out of body experience, and was completely unaffected by it. I didn't even start to cry. All I could think was: well, you are always one to say 'LIVE your memories first, scrapbook them second,' right? So now was my chance to practice my preachings.

Then I started thinking about the Canon system I've been whining about switching over to forEVER. And for whatever reason, I knew it was going to be okay. I was going to go to the most magical freaking place on earth. As a scrapbooker. With no camera. And I would survive to tell the tale.

So that's part one. Too much drama? Not enough? All I know is we hadn't even left the good frozen soil of Minnesota and one catastrophe was under our belts. It ALL had to be uphill from there.

I'm on my way to Utah today. Will post more exciting installments of this riveting travelogue from Utah. And, I will make the remaining months for the tagger books, too—next weekend, when I'm home—as well as share some of my tags.