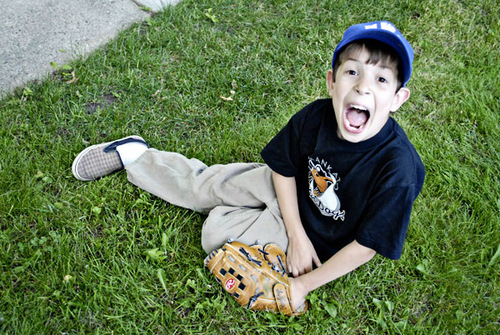 I will be the first to admit that at times, my language usage is, how does one say, less than stellar.

But over the years, I’ve continued to try finding new ways to say old things—things that aren’t meant for 8- or 12-year-old ears. You follow, yes?

For example, I do not like to take the Lord’s name in vain. That said, I grew up in a house where you might have thought my first and middle name was, in fact, Jesus Christ, followed by a third name, Cathy. (Hi Mom and Dad! I love you!)

So my solution to this inappropriate but partially engrained "expletive" is that if and when it slips out, I simply add, in a much calmer tone, "… our Lord and Saviour." Somehow, I feel that is setting a better, more humane example and reaffirming a Zielske belief: don’t sully the name of Sweet Baby Jesus.

But one of the times when it’s hard to control my loose tongue is when I’m driving. Don’t get the wrong image of me; I’m not some road rage filled jerk hurling f-bombs at every passer by, but I really have a hard time with one aspect of driving: people’s lack of depth perception at four-way stops.

Now to me, the process is painfully clear. You stop, and quickly assess the situation: who got there first? Duh. But it seems that most drivers today have lost their ability to do this at four-way stops all across this great land of ours. And when this happens, it causes me to utter my most favorite of tame expletives in the following manner:

Now, if you break dick weed down, it’s not really a bad thing to say. Because if you were to take it one step closer to literal, it would be "penis wild plant growing where it’s not wanted." And I’m sorry, but that is SO not offensive. But then again, it’s also not as catchy.

I realize using a term like dick weed is possibly an unhealthy way to express the anger I feel at that moment, waiting for people to figure it out and just GO already. But really, most of the time, those people are NEVER going to hear me say it, so where’s the harm? Plus, this phrase is much more innocuous, than say, #$%@#& #&%#er. And it very likely won’t cause irreparable harm to my childrens’ budding collective sense of justice or decorum.

So last night, while driving home with the kids from Cole’s baseball game (where they handed the other team their heads on a 10-and-under platter), Cole asked two things: 1) Mom, can we go to Dairy Queen? and 2) Is it okay if I say dick weed?

After the laughter in the car died down, I basically just broke it all down for the kids, much as I have done here, pointing out that if you put it on par with saying "penis wild plant growing where it’s not wanted," it’s not THAT bad of a thing to say, considering today’s alternatives. And that really, let’s face it, it IS kind of funny. And all of this reaffirmed the answer I supplied:

"Just please don’t ever use it at school. "

Have a great weekend, blog readers. Also, some of you had questions about how classes at Big Picture work. There is a great faq that might answer a lot of those questions. Also, some of you asked if it would be a good class for digital scrapbookers, and my answer is: absolutely. This is a class about design, not on product or how you choose to assemble your projects.