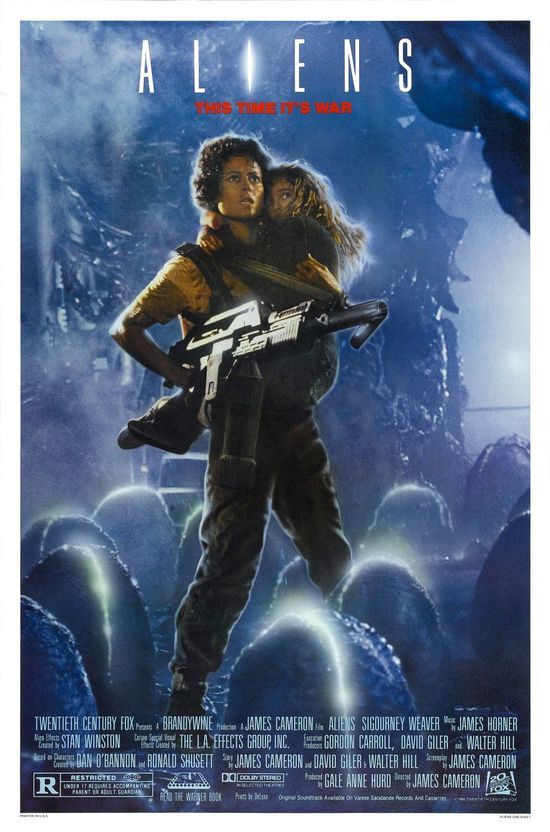 I have a confession, which is neither deep nor scandalous in any way, but I believe it definitely says something about who I am: there are certain movies that, when they come on the television, I cannot NOT watch. Period. No matter what scene I'm joining in on, be it the first, the middle or the last. I simply cannot turn away. This happened to me last night, when I was flipping channels and happened upon one of my most favorite movies of all time: Aliens.

I said the following: "What? Is it my BIRTHDAY?" because I happened to turn it on right at the start of the movie. Score!

Here is my short list of movies that have the same effect. I'll start with the aforementioned gem:

1. Aliens—Three words: Marines in space. DUDES. Tell me you didn't think Vasquez was the number one bad ass of the entire universe. I love this movie. Love. Love. Sigourney Weaver kicked ass. No amount of acid for blood could deny her of that. I will admit the little shrieking girl was a bit of a distraction, and I will forgive James Cameron for that. But come on, who didn't want to put Bishop back together and take that android hero home? I mean, really. He did good.

2. Alien —No, not a broken record. This is the first Alien. A freaking masterpiece of claustrophobic freaky, drippy, dark, metallic space tension. The dinner scene where that adorable little alien pops out is probably one of the coolest gruesome movie scenes of all time. Side note: Coleman's middle name, Asher, was partially inspired by that horribly evil android, Ash. And of course, the Bible. Sigh. I hated that synthetic human, but loved the name.

3. The American President —for me, it is worth watching this movie for two reasons: 1. When he tells Michael J. Fox's character that people don't drink the sand because they're thirsty, but they drink it because they don't know the difference, and 2. When, at the very end, he says to Annette Bening, "It just so happens, I have a rose garden." Or something like that. The bottom line: a very clever movie with so much good quotable dialogue, how can you not like it?

4. Forrest Gump —This is actually one of my all-time favorite movies. I quote it all the time, but my favorite person to quote is Lt. Dan. My neighbor Jay and I do good impressions of Lt. Dan. "Ya sent me a letter, you idiot." Try it. It's way too much fun. More fun? When Forrest is doing the voice over on the bus while he's getting to know Bubba, and says, "Bubba knew everything there was to know about the shrimpin' business," then Bubba says, "I know everything there is to know about the shrimpin' business." I will go on record to say any movie that has a voice over that says the same thing as the character is about to say could also be on my favorite movie list.

5. Alien 3 —Oh, don't give me that look. It's a GOOD movie, too, and you know it. It was when they brought Winona into the franchise… that's when it all went to hell in a handbag. Heard THAT.

What can't you turn off? No really… your secret's safe with me…