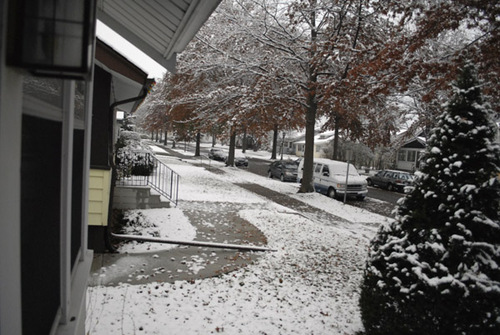 Ah…just as fall begins to quietly head South, winter in Minnesota is slowly but surely creeping in. Just a wee dusting. So pretty on this fine November day. I do like winter. I have no problems with being cold. That is what down comforters and bourbon are for. (I’m joking! I don’t have a down comforter!)

It makes me want to take the day off (which I’m not going to do) and just make stuff. Like my ready to be filled December Daily album, which took me all of two nights to gather and create. Go me. 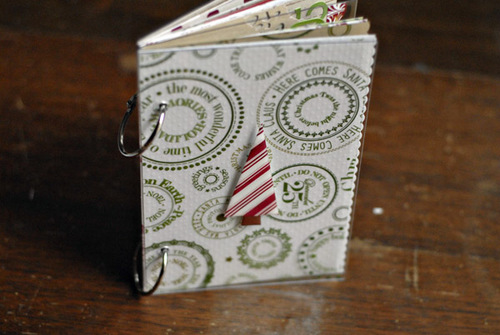 I primarily used stuff from Danelle Johnson’s Hollyberry, Mistletoe, and Noel collections, and tossed in some letter stickers for the days from both KI Memories and American Crafts from my overflowing stash. The cover is an acrylic cover and for the life of me, I can’t find the packaging. But, it’s around 4.5 x 6.5 in size. I’m looking forward to doing this project because the Christmas season is one of my least favorite times of year. I know, I know. What? Am I some kind of Scrooge? I guess just as far as the commercial aspect of the holiday goes. I’m doing some things this year to hopefully change some of the blueness I feel about that part of Christmas. I’ll let you know how it worked out.

Another thing I would love to just sit and work on today is the project from the Stories in Hand class I’m taking from Jessica Sprague. 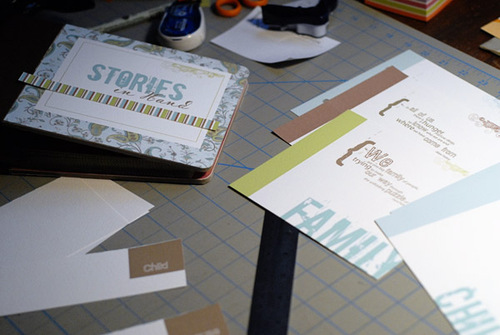 Last night, in the dim light of my "studio," I began cutting and assembling the pieces. One thing I can say: Jessica Sprague, you got it goin’ ON. If this is any indication of the thoroughness you get in other classes by her, I say run, don’t walk to her website to learn more.

But instead, today…I’ll get back to work. Right after I finish typing this little entry.

One thing,  however, that is already helping me prepare for the onslaught of the holiday BUY NOW messaging is this: 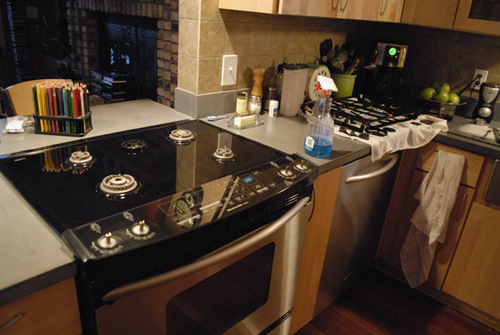 No, it’s not my super-pain-in-the-ass-to-clean glass topped stove (really, why couldn’t those kitchen show people have talked me out of THAT one?) It’s that after I took this shot, I saw the colored pencils.

Those colored pencils were one of Cole’s Christmas gifts last year, and I kid you not: He has used them nearly every single day of his life for almost 11 months now. Every. Single. Day.

Those RoseArt pencils from Target cost me $9.99. Of all the things he got last year, this is the only one he goes to again, and again, and again. And what he does with this gift—creating his miniature illustrations of baseball stadiums, and scene re-enactments from Independence Day, or even just simple illustrated Christmas lists—is just one little gift after another.

No way to bah humbug that one.