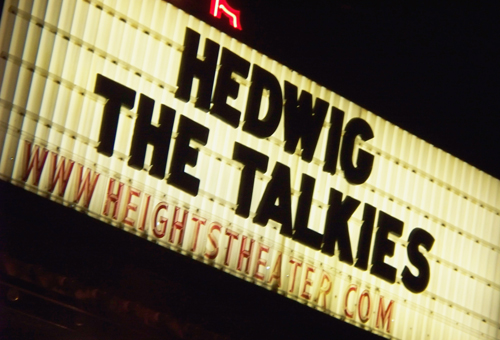 So last night, I got hopped up on Sprite and went out (gasp!) to a wonderful event, The Talkies, featuring one of my all time favorite films, Hedwig and the Angry Inch, with the creator/director/star and all-around most charming and sincerely talented man ever, John Cameron Mitchell.

The event was two screenings of Hedwig. One to watch, and one where they all but turned the sound off and John showed up, and simply entertained the hell out of the audience with his wit and occasional potty mouth. The poor thing was fighting a horrific sounding cold, and pretty much lost his voice by the end, but it was just so dang entertaining all the same.

At one point, he was asked what he was working on presently, and he said he couldn't really say, but that he was working with a big name star, and he added, "A big name Botox kind of star" and that he couldn't divulge any more about the project, to which my clever husband shouted out: "Are you talking to Phil Collins' people?" Which not only made everyone in the theater laugh, but left JCM without a good comeback. (For those of you who have seen the movie, you know why it's funny. For those who haven't, watch the Wicked LIttle Town clip on my sidebar and it'll fill you in.)

It was a good night. He dished a bit on one celeb he thought was mean and soul-less (Madonna) and he told a story from his own experience where she was really mean to one of his dear friends. Never heard celeb gossip from the inside. Funny stuff.

There was a really sweet moment when a 15-year-old girl explained how she'd written him a letter when she was in the 2nd grade, and that he'd meant so much to her life… and he invited her down for a hug and to thank her mom for being cool enough to let a 2nd grader watch the film.

[Note: Cole went through a brief Hedwig stage, but has only watched the music clips on the DVD extras. There's one scene I'm just not sure I want to be the one to explain to him. I leave that one Dan. Although one of my fondest family car trip moments was last summer, driving up to Brainerd, and all four of us were singing along to Angry Inch. And yeah, maybe not an idyllic song for all ages or personalities, but it definitely rocks. And it's brutally funny.]

In the end, it was just inspiring to be in a room with a man who created an amazing body of work—Hedwig really has taken on a life of its own—but who has the perspective to realize that if you live your whole life protecting the one thing you're known for, your life might not really be turning out exactly the way you might like.

Then he said, "What the hell am I doing here?" and turned to walk out the exit door.