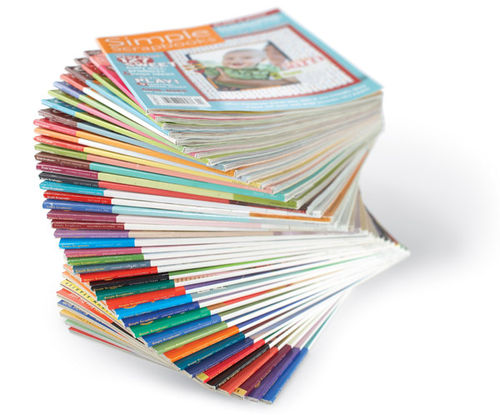 Even though the final issue of Simple Scrapbooks Magazine won't drop until sometime in mid-April, my final day with this mag that I've come to appreciate on so many levels—creatively, professionally, financially—is here. And I thought I'd take some space to wax poetic, or at least say thank you to the amazing group of people that I've been honored to work with over the past 6 years.

Sigh. Six years. Not sure if I ever told the story, but see there was this new magazine, and I was a new scrapbooker, and when I saw this magazine, I thought: "Hey, my pages are simple. Wonder if they'd want any of them." So I sent a few in.

It started with a few layouts here and there, and a magazine cover that ended up looking a lot like this: 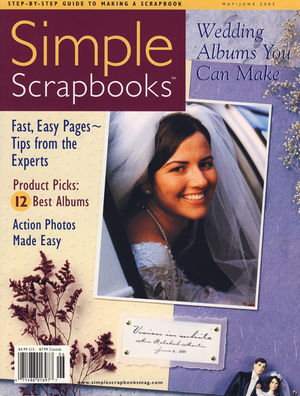 I worked on that layout for HOURS. I know. Hard to tell. Still… landmark moment for me. And ushered in my heavy usage of the Carpenter font. Oh, those were the days.

Eventually, they let me do a column called, "Font 411." It made sense. I knew type. I knew scrapbooking. Le voila! One of my early columns looked more or less like this: 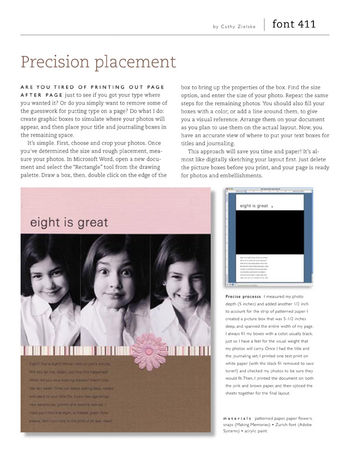 Then they let me write some features. Then I convinced them that if they really truly needed some freelance graphic design help, I really DID know how to do that sort of thing. Then they believed me. Then they hired me as a contract designer. Then on the side I wrote a book. Then another book. Then I designed books for Donna. And Stacy. And then did more columns, which we later changed to "About Type" and then later to "About Design". And then I was working so many hours they said, "We're going to hire you full time, with healthcare benefits." And I said, "Cool."

Many of us work. We have jobs that we get up and go to. Every day. Once in a while, you connect with a job that not only pays you every two weeks, but if you're lucky, it fills you up creatively and personally. I'm no dummy. I know these jobs are few and far between, especially speaking as a graphic designer who has worked for a trade association of debt collection agencies (1991-1997); or a chain of Texas grocery stores (1988-1989).

I got to work with and design for something that I loved, and still do: memory saving and story telling. How cool is that?

So this is my little thank you to the people who have made this a pretty singular experience. People like Stacy and Lin, Don, Mark and John. Wendy, Angie and Jennafer, Tracy and Dana, Carolyn, Rachel and Lynda, and Megan and Jen, and Jenny and Elisha. And people like Marin, who is my design soul mate and really made my job possible in more ways than one. And Tom. And Brian, Symoni and Claudia. And the prepress guys. And the printers. And all of our Simple contributors. And Paula, Emily and all the women in the events team. And the Retail team. And the IT team. And Mike in the mailroom. And anyone else that I'm forgetting, but that I will very likely remember as soon as I hit post.

And, to our readers. Thank you.

That's a very good question, and one that I will be delving into next week! I will tell you that I've been working on two new online classes for BigPictureScrapbooking that I'm pretty dang psyched about (and the first one revolves all around the aforementioned Facebook and Twitter, and I think some of my fellow online junkies will dig it!). I'm also going to find some new ways to talk about the things that I love most: telling good stories and making them look good in the process.

And one last thing for those of you who follow your feed, or your bookmark, or your accidental internet stumbles, and find yourself here: thank you for reading. It matters to me that you have an interest in anything I write here. And if that makes me a slighly insecure person for saying so, I say, "And this would come as a surprise to you because…?"