And busy doing what, you may be asking yourselves?

It started simply enough last week, with my sort-of, kind-of, but-technically-not-really mud room. I present the before: 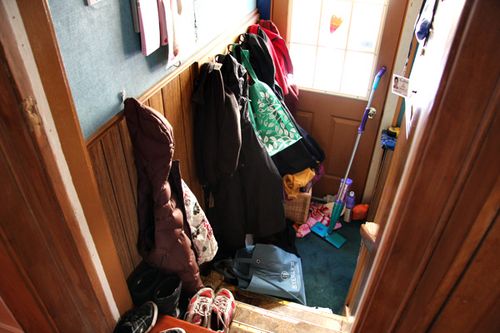 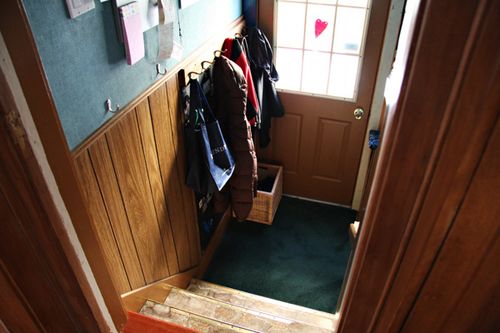 Seems simple enough, right? Took me TWO bloody hours. I kid you not. This isn't really a mud room, because during the frigid Minnesota winters, if we opened this side door to our house, we wouldn't be able to close it. Old house. Bad door frame. It's nice to dream though. Still, my favorite framed piece resides in this little nook: 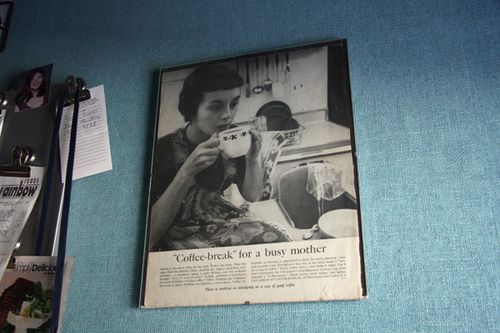 Dan found this in an old Life magazine years ago, popped it in a glass clip frame, and voila, there it hangs. 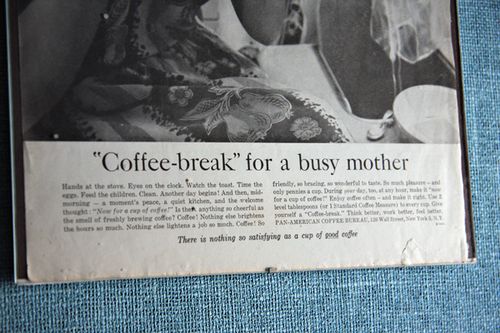 I'm wondering what is IN her coffee to make her look like this. Can you say, "Liquid Valium"? 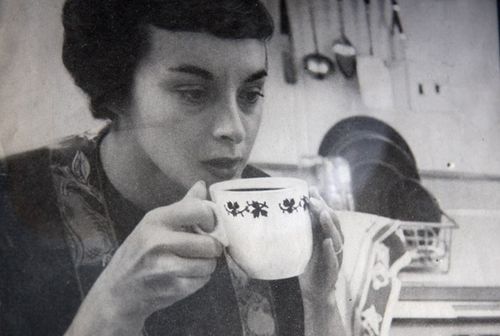 Enter, if you will, my closet, which although you cannot actually see in the next shot, you can see what happens when it burps. 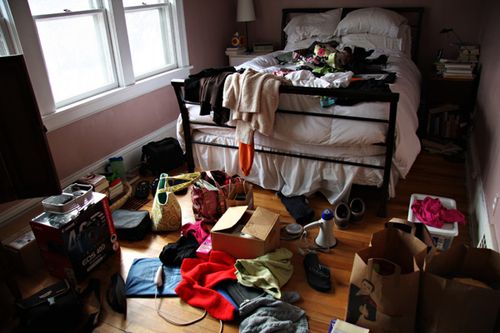 And spills into the hallway. 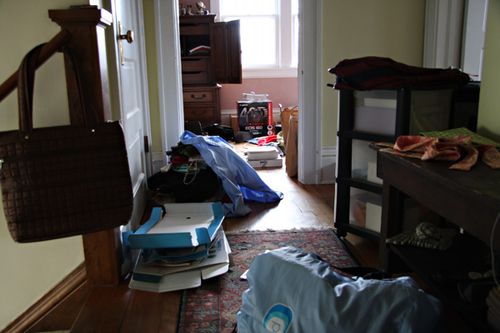 Now, before I go off and slag my closet, I will say this about it: it's big for a house built in 1918. You can walk into it, and up the stairs, all the way to the attic. I'm not sure why it becomes such a disaster every three months. It's not like there's much in the way of clothing or shoes in there to get in the way. But it is fun to find things I forgot I had, like this old tape carrier, with a few choice musical selections from the days of yore. 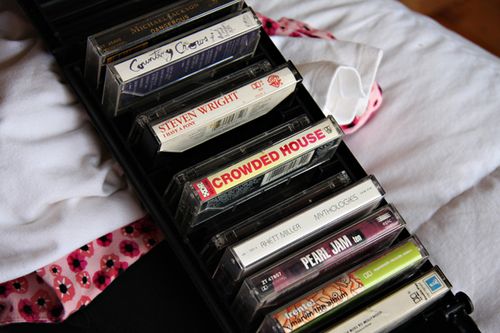 I think this proves any fair weather fan accusations with me and Crowded House, people. I bought their first album. ON CASSETTE! Thank you. But I think one could build a case (no pun intended) that I was musically a bit confused at one point or another. Nothing says, "I'm cool" like having both Steven Wright's I Have a Pony AND Michael Jackson's Dangerous in your collection. But I can always point out that I also had this: 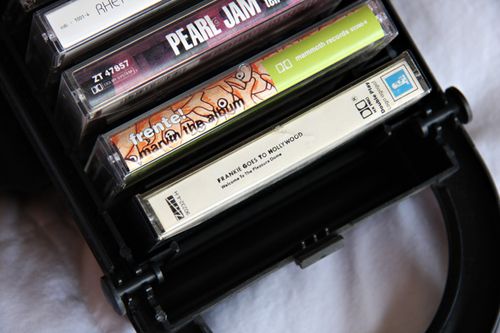 But once we get into the closet, and get it all sorted out, we have to at least take a few victory steps up to the attic. WARNING: What you are about to see may disturb you, and cause you to impersonate Jamie Gumm from Silence of the Lambs. "Preciouuuuuuuuus."

First you go up the stairs: 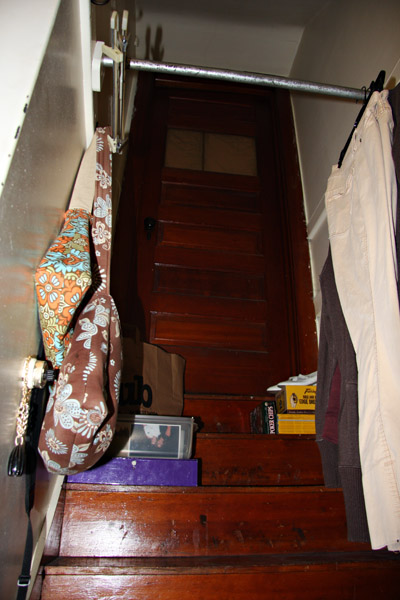 Then you open the door, (after passing by two of my super cute ElisaLou bags): 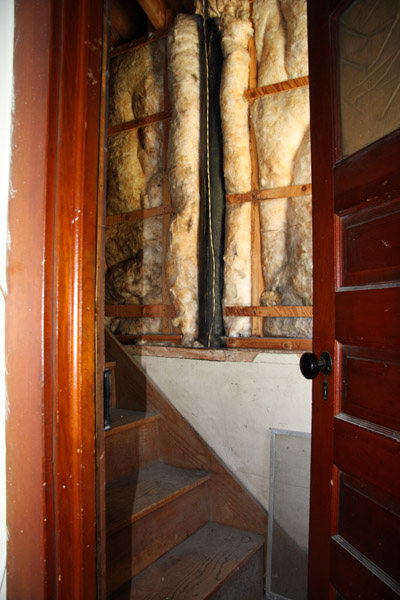 Then, you turn and go up the stairs, and see this: 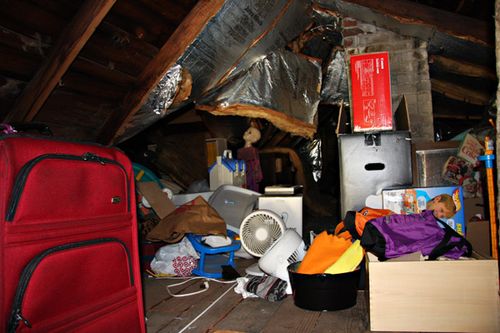 I'm not which is more distrubing: the falling insulation, or the small figure in the far back bearing an uncanny resemblance to the subterranean human skull-snackin' creatures in The Descent. 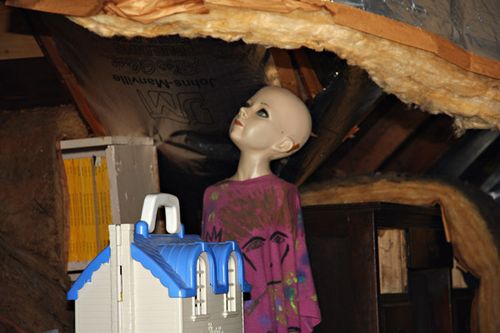 All I'm saying is this: if and when I decide my new "busy-ness" includes emptying out this attic space, and you don't hear from me in a few weeks, show the above picture to the police.

And speak of me fondly, saying things like, "She was just really good with adhesive" or "She always had such good hair."

In Other News
Thank you for all the birthday wishes! We had a great birthday weekend, me and my old man.

And thanks for the submissions thus far received for Design Do-Overs, and by all means, keep 'em coming!

One final note: I added a little navigation bar to the top of the blog. Up there, you'll find some good stuff, especially links to downloadable PDFs of my About Design column from 2007 and 2008. Hoping to get 2006 up there soon, as well. If you missed an issue of Simple, or just want some good, free design info, check it out!