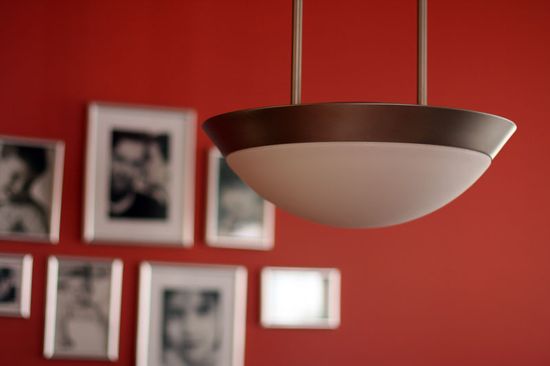 For those of you just joining us, the reason I have a super-modern kitchen is because we got picked to have it remodeled on a show called Kitchen Renovations, which aired (and is still airing, strangely enough) on the DIY Network. It was a really cool thing to have done, and I've amply documented it through our lovely scrapbooking hobby, making a layout which some of you remember was in my first book, right through to a totally cool before and after album (which appeared in some issue of Simple Scrapbooks, but I honestly couldn't tell you which one.) 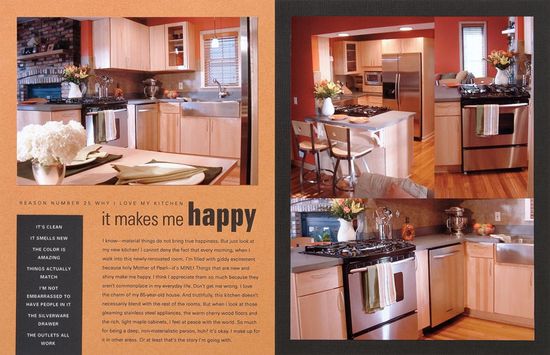 All that's well and good, but back to the bulb changing.

A few weeks back, I enlisted the help of One-Three to help me twist off the light globe so I could get at the bulbs. It takes two people to get that inverted dome off—one to hold the stainless steel fixture, and one to twist off the dome.

Once it was off, I swapped out the three bulbs, and replaced the dome in the stainless fixture, or so I thought.

See, I'm never quite sure if it's twisted back into place all the way. It's never a smooth twist. It's always like, "Uh, yeah… I guess that's in."

Well this time, I guessed wrong. Wrong to the point that two minutes after I'd figured, "Eh, it's in," it came crashing down onto the kitchen table, exploding and shattering all over sweet little One-Three, who was just trying to do her algebra homework. No one was hurt, thankfully, but Cole shrieked loudly enough from the other room to nearly break window glass, and One-Three? She just sat there silently, a bit shell shocked, while I began methodically removing glass shards from every single space on and around her and in my kitchen at large.

Long story short: I was able to order a replacement globe and it just arrived the other day. (There's actually another story about me wigging out on Dan because I just KNEW we'd never be able to replace the globe and that now we'd be the family living in a kitchen with a broken light fixture until the end of time, but that's for another day…)

I picked up the fresh dome, returned home, and once again enlisted the help of One-Three. At last, success! But this time we weren't taking any chances. 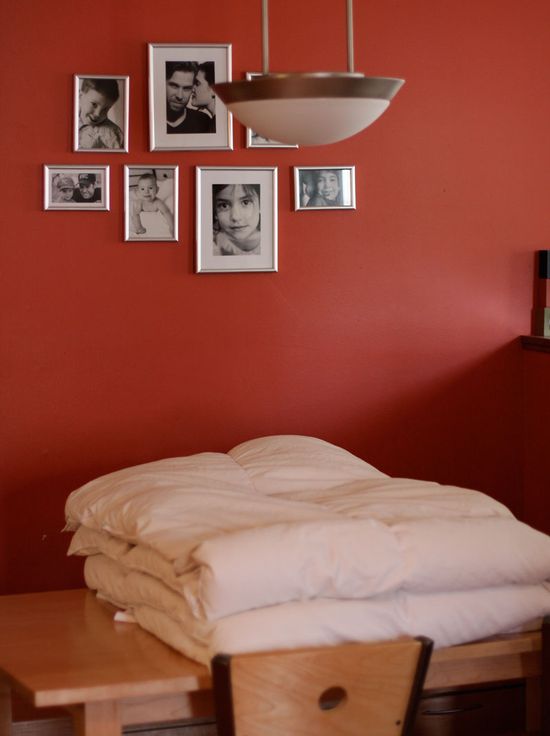 We've found it only mildly annoying during meals.