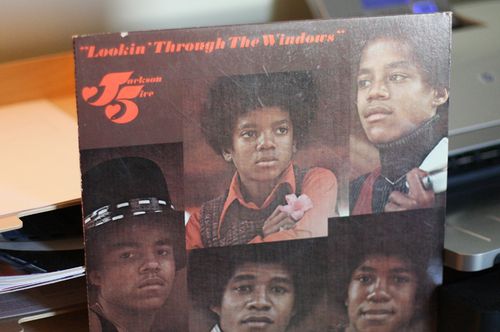 I've been looking since last night to see if I could find my high school yearbook from 1984, the year I graduated. For some reason it has gone missing so I can't quite recall what I wrote in the short paragraph seniors were each given in the back of the book. I'm 99 percent sure I wrote that I wanted to do something with Sting, and to also be Michael Jackson's personal secretary.

I grew up with Michael Jackson's music. One of my first records, other than Bob McGrath Sings Sesame Street and The Partridge Family, was the Jackson 5's first album, that blue one, that looked like it had a frame on it? Remember? The five of them we're on it, and the tracks were "I Want You Back" and "ABC" and "I'll Be There"?

Do you remember when he performed on Motown 25? How freaking COOL it was? I remember going to people's houses who had VCRs and had taped it. And we watched it over and over and over again. Bad lip synching damned. It was magic.

We all know in the latter part of his life he seemed, for all intents and purposes, a little bit bat shit crazy. And then the courts of law found him innocent of all those horrific charges. Still… his contribution to music is undeniable.

His story is so American, and so amazing, and so bizarre, and so tragic, all at once. I for one do hope he rests in peace.

This is such a great vocal on one of my favorite songs…bear with Bill Cosby.