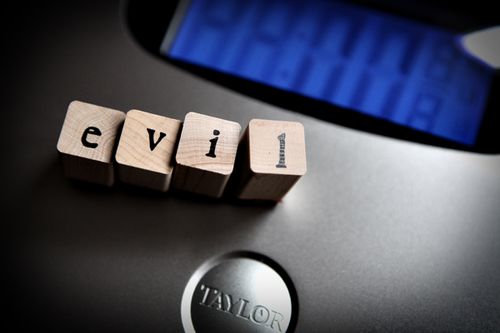 I was tired of the old scale's annoying habit of never going back to "0" on its own, not to mention the "jump-up-and-down-a-few-times-until-you-get-the-number-you-like" factor.

I should back up a bit here: before I started my new fitness regime, I went to the doctor and had a full physical. I wanted to make sure I was cleared of any medical reasons that would prohibit me from beginning this new, healthy lifestyle. I think part of me was secretly hoping I would hear, "Cathy, I'm sorry…but according to your numbers, we feel it best that you should simply continue on a course of copious french fry eating and near-complete physical inertia. We'll see you next year!" But alas, it was not my fortune that day. All my numbers looked good. Except one.

When I stepped on that doctor's scale back in late December, I won't lie: I was shocked. 182. Hello ego bruise. I had been clinging to the 170s, deluding myself (thanks to my erratic home scale) that I was still staying out of the Obese category for my age and height. For me, it was a turning point and that's why I decided to begin anew in the new year.

The first quarter of Living My Best Life is going well. Inches are slowly beginning to fall off, and my tushka is taking up less and less couch space. Still, every time I stepped on the old scale, I got tired of saying, "Well…. it LOOKS like 161.5. I'LL TAKE IT!"

Enter the new scale. For all I know, it could turn out to be a piece of crap. The single online review simply says, "DON'T BUY!" But what this new scale gives me are concrete numbers. From what we can tell (the entire family has repeatedly been testing it out) it gives out those sames numbers, step on after step on.

So on Saturday, when I hopped on for my weekly at-home weigh in, I gained a cool 5.6 pounds just like that.

Now I know, I know…I didn't REALLY gain it. In fact, I stepped on the old scale, which congratulated me with a single pound loss for the week, after I jumped up and down on it a few times. Still…I'm moving on.

I promptly went back to my Weight Watchers records online and added 5 pounds to each week's numbers, changing my starting weight as well.

At least now I feel like I'll be comparing apples to apples. Or eating them anyway.

And while I know it's not just all about the numbers, I can only reply to that mind set with: Hi, have you met me?

p.s. That .6 pounds I neglected to count? I attribute that to holding my breath when I stepped on.  So that, dear blog readers, is a gimme. 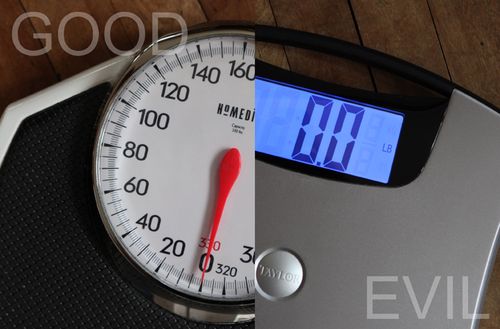