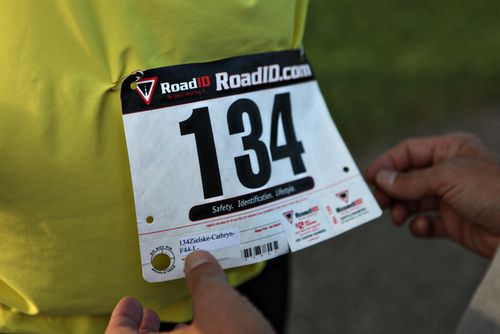 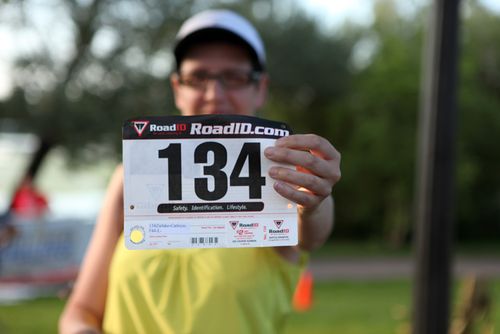 And it happened six months and one day from the day I decided to hop back on the health and fitness wagon back in early January. 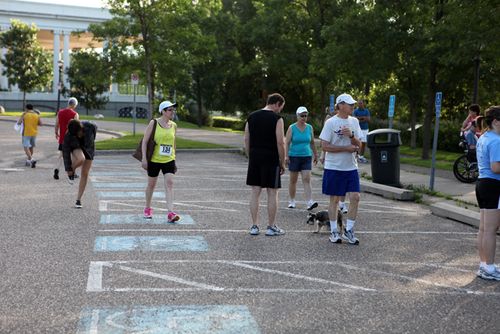 I slept about three hours the night before. I was a twisty bundle of nerves. It was the same nervousness I remember from every single swimming or skating meet I ever took part in during my youth, or from every single public speaking engagement I've done as an adult in the scrapbook industry. 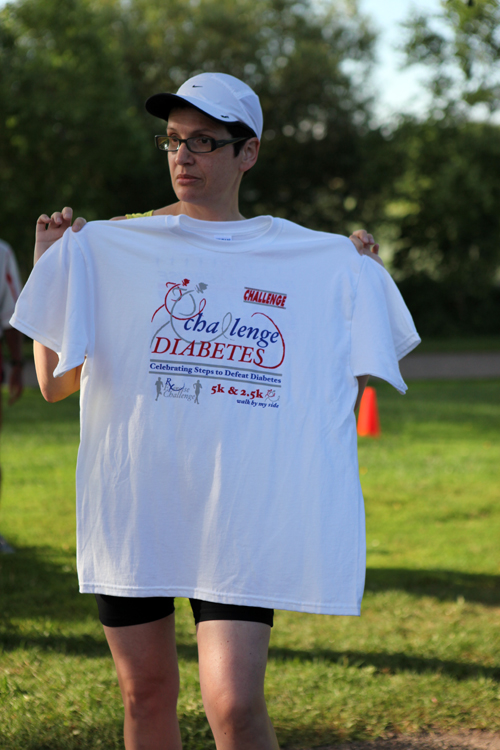 I registered last Thursday, just hours before the online cut-off, careful to not fully broadcast to the Internet my weekend intentions, lest I decided to say, "You know what? Not gonna happen this time."

But with my family on board to wake up early and cheer me on, there was no turning back. 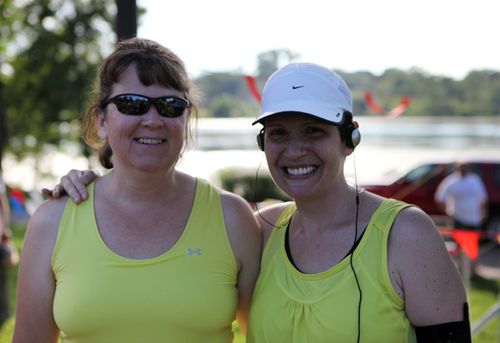 The weather was a perfect 70 degrees, and I even ran into blog reader Minda who started running herself over a year ago for many of the same reasons as me.

I lined up toward the back of the pack, secured my headphones, straightened my hat and waited for the start. 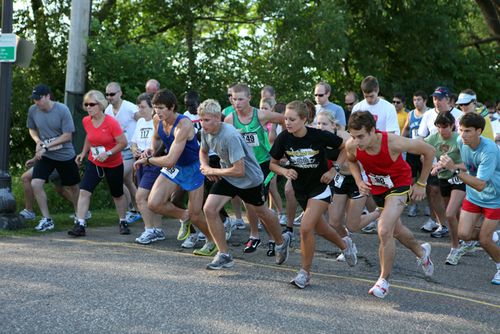 My biggest fear in all of this wasn't the distance. I've been steadily increasing my running distances over the past few months, adding a few 10ths of a mile here and there on my longer run days. 3.1 miles is now my average run. 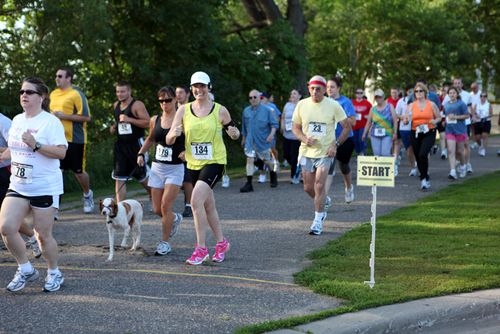 But once I took off, and the Dixie Chicks began singing "Takin' the Long Way Around" in my earphones, I was nothing but goofy smiles, white legs and hot pink shoes. 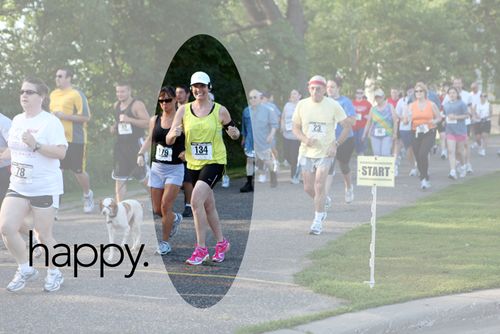 Seeing Dan, Cole and Aidan cheering me on left me jubilant. 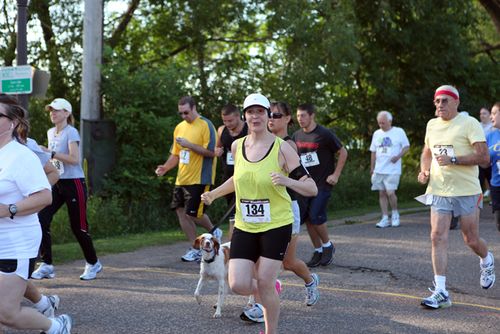 I really couldn't stop myself from 'wooting' at them as I passed. 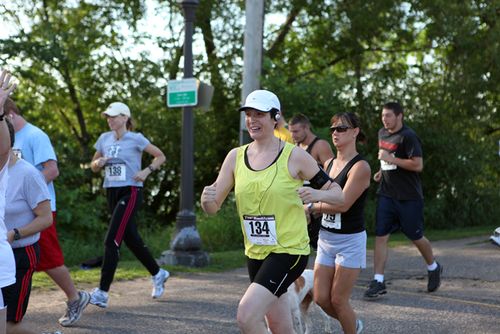 I mean, seriously. What? I was running a race? Get OUT! 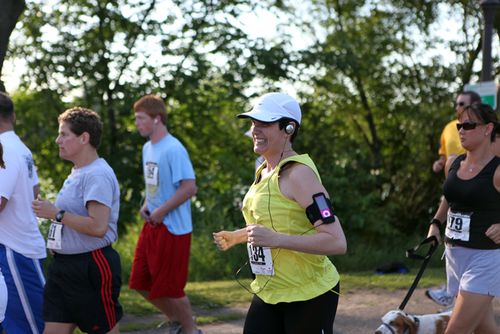 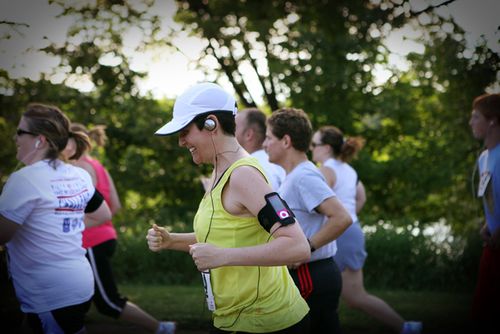 I'd like to say after this shot I put the hammer down and never let it up, but instead, I will say this: I ran the fastest per mile pace of my short but esteemed running career, a 10:30 per mile. 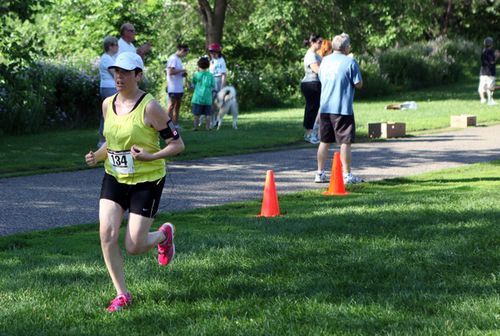 I felt great, albeit a bit on the toasty side, and I knew I was pushing it just enough, based on my Nike+iPod feedback. 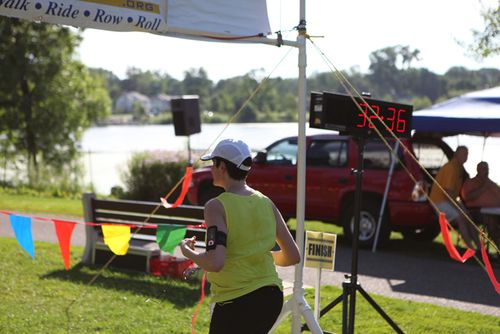 Then I crossed the line in 32:38. Outside. In the summer. Using my legs. And just a little bit of heart. 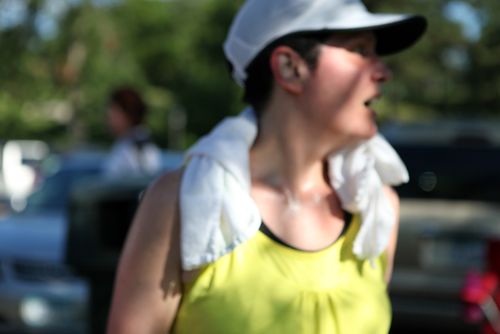 Yep. That's me. Former smoker. Former chubster. Former "What? I don't want to sweat, are you crazy?

(Thanks to Aidan, my talented photog daughter, for documenting this day!)