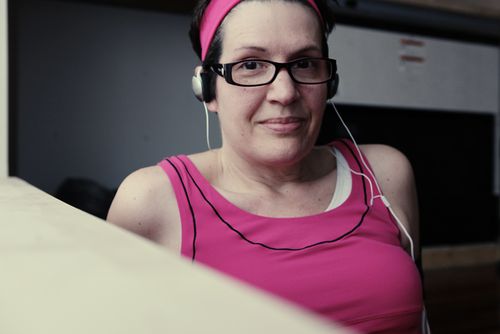 I know. The new year began last week. But for me, last week was a haze of Kleenex, Luden's Wild Cherry lozenges, moaning and episodes of Big Love.

It was also a week of Moving Much Much Less Than Planned. Only two short runs last week. So much for kicking the new year off with a bang.

I even rallied over the weekend, going for a run then going out for a night of bowling with my hubby's siblings and their spouses. But I paid for it by not leaving the couch yesterday, and watching Avatar one and a half times.

But it's a new week, and I realized this: you can have the best laid plans to do it all—eat better, exercise more, be kind and giving to everyone you know—but life doesn't necessarily give a rat's ass about your plans. I'm at 67%. It's going to have to suffice for today.

I realize so many of us set out to make some meaningful changes and while I had a setback of sickness (and a weight gain to boot!) I still am excited to work toward my goals of being healthy and active. So how are you all doing in this new year?

(I also realize in the photo above my left boob looks abnormally large, but that should go without saying.)