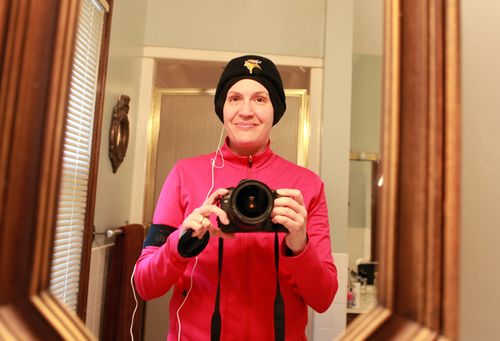 Hello all who seek to Move More and Eat Less!

It is I, Cathy Z., your fearless reporter coming to you from the front lines with the latest installment of, "Hey, so how's the chub reduction going anyhoo?" And the word on the street is… not as expected.

Another word I could use is 'sucky.'

This month has been both frustrating and informative. I end the month having lost zero poundage. This month has seen a small gain, which has been a pattern that began in November and if that pattern had it's own Facebook page, let's just say I would not be clicking the 'Like' button for it.

Let me start with the high points.

High Point Number One: I am whole-heartedly connected to Moving More. Despite kicking off the first week of the new year sick on the couch where my only movement involved nose blowing and clicking the remote control, I was really amazed at how depressed I felt, not just because I was miserable and achey, but because I couldn't exercise. Initially, I was fearful: Oh man, this is IT! The decline of fitness is beginning! I thought that a week off was going to set that ball in motion, the one that spirals down to complete inertia and my old inactive ways. But as soon as I came around to better health, I got back on the treadmill and rode.

I Move More six days a week, almost without fail. Exercise has become a part of my life. And actually a good part of it. One I feel I need to maintain a sense of mental peace. One I actually desire.

I run four days a week; I swim or do the elliptical on two others; and on Sundays I rest. I have slacked off on the weight training this month, but I'm looking ahead this month to getting two days of that back into the rotation.

When I run, I'm not running as fast as humanly possible to the point of exhaustion. I'm not fast and very likely never will be. But then I press stop on the old iPod, it's with sweaty hands. When I swim, same deal. I'm not doing sprint intervals in the pool. But I just keep on going for 40 minutes until my body says, "Okay, you're good."

High Point Number Two: I did not gain more weight than I did.

And that's about it. 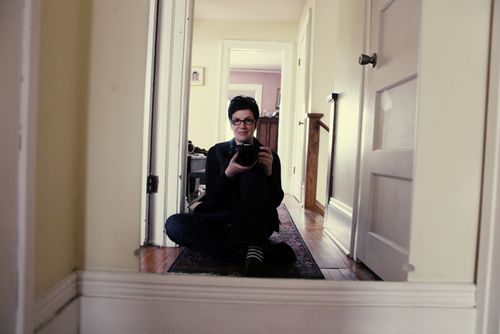 I'm not saying there were tons of low points this month but what I am saying is that for now, I've got this Moving More thing down to something that clicks with me and my lifestyle. But the Eat Less thing? Now that's a whole 'nother story.

Then Weight Watchers introduced their new Points Plus program and I thought, "Cool! A new plan for new inspiration."

I want to believe that the new Zero Points fruit will work for me. I want to believe that having 3 servings of fruit a day (grapes, apples, pineapples) will work with my body chemistry and metabolism. As it stands this month, I can't say either way if this is going to work. If you're not following the plan accordingly, how will you know?

So as February begins, I'm tightening my belt, so to speak, on following the Eat Less plan. As you all know, this isn't about NOT eating. This is about learning how to eat well and balanced for your body without overdoing it. It's about eating LESS crap and more good stuff.

There are still days, though not as many, where I feel pissy and mad that I'm basically never going to be able to sit and eat what I want all day long…at least not as long as I want to maintain a healthy weight.

There are days where I want to throw the baby out with the bathwater and down an entire bag of Lays Potato Chips, and chase it with handfuls of Hershey's Kisses. That's just life.

But rather than feeling sorry for myself and being discouraged that those numbers seem to keep inching up, I'm identifying the reasons and coming up with solutions. I'm up from a low of 141 last October. Gaining 12 pounds is a big deal because it's telling me that I'm playing around with self-sabotage to see if some of my old crap-eating ways can still find a place in my healthy lifestyle.

The answer seems to be staring me straight in the eye.

I know that getting into shape and maintaining it is a choice I make every day. The rewards of feeling better, having more energy, and having a clearer mind are powerful motivators. I also know the feeling of downing that bag of chips is a whole different kind of reward, but one that only feels good initially. Then, not so good at all.

I guess I'm trying to process that for a year, the numbers kept going down, and now they're going the other way. And some days, I feel just a bit sorry for myself. And then, I snap out of it and take action.

There's so much more tied into this than just the numbers though, isn't there?

Here's my page for the month: 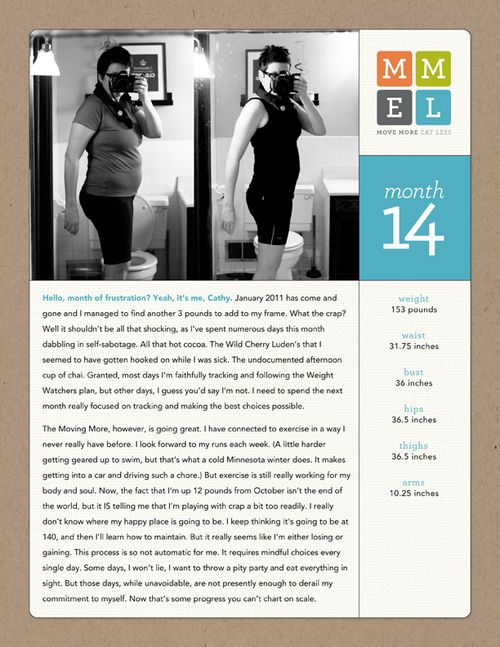 So how are you doing in your journey? I really love to hear the discussion and all the highs and lows and in-betweens. By all means, the floor is  yours…