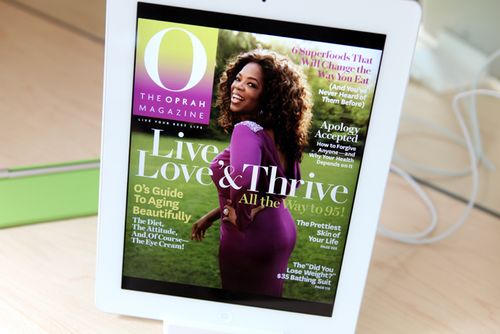 Today is finally here. The last official broadcast of the Oprah show. When it was announced late last summer, it seemed like a day that was eons away in the distant future in some alternate universe. In short: this day was a hard one to really believe was a-comin'.

Some people love Oprah. Some people couldn't give a rat's tushka about her.

I belong squarely in the Love Her category and I'm going to try my best to tell you why.

I turned 20 in 1986, the same year that Oprah's show went on the air nationally. At 20, I was officially an adult (or so I liked to believe.) As such, I did a very non-adult thing and I moved back into my parent's new home in Texas following a family relocation from Seattle in order to finish my college education. For the first time in my life I had a television in my room—with cable! My favorite show was thirtysomething and I watched the Tonight Show with Johnny Carson every single night before going to bed.

In 1986 and for many years to come, talk shows were sensational, sometimes a wee bit trashy and usually good for an hour of entertainment when I needed a break from studying for an upper level communications final. I also didn't know a lot of people in Texas, and I'm not ashamed to say Oprah kept me company during times I wished I had someone to hang out with.

I'd like to say that I remember each and every Oprah show I ever saw, but I don't. I remember thinking she was a breath of fresh air in the milk toast television landscape. I loved that she was different. At the time, I felt like a different person myself, one that was trying so hard to figure out who I was and who I wasn't and where I fit into this world at large.

I do recall, however, one Oprah show, and for the life of me, I can't find a link to it, but it was a show on racism, where they had a group of African American men and caucasian men in a room for a really frank and sometimes shocking discussion on race in America. I remember very clearly it being one of the first times (and Lord, how it wouldn't be the last) that I was absolutely glued to the discussion, with tears streaming down my cheeks as I felt the raw emotion and the pain in that room behind my television screen.

Oprah made me think about things I hadn't thought about before. She made me empathize on a regular basis. She made me cry during non-prime time television.

In 1998, after two years of post-baby weight gain that had gotten completely out of hand, I bought her book "Make the Connection" and did exactly what she and Bob Greene told me to do. There is a list of 10 things to live by in that book, and live by them to the letter I did. In a year, I lost 40 pounds and returned to my fighting weight. Of course, I also decided to pick up smoking again, and kissed the exercise component goodbye.  But during that glorious year, I worshipped at the fitness altar of Oprah daily, believing, truly believing that if I did what she did, everything was going to be okay.

When Oprah failed at her own fitness goals, I shared in that too. As I started to smoke again, I remember feeling like a failure as well. And when I quit a second time, and the weight came back on, I had her right there with me, realizing that some things in life are hard for just about everybody.

When Oprah made the decision to use her show as a platform for good, I cheered. She rose above the sea of "schlalk" shows and elevated the medium to a whole different level. Sure, she had her fair share of makeover shows and related fluff, but by and large, when I watched her show I learned something new, or I at least thought about it in a different way.

Oprah even got me into trouble at work from time to time. I remember once in 1998, Madonna was slated to be on as a guest. It was right around the time of her Ray of Light album, which I adored, and I really wanted to get home early to watch the show.

I was working as a designer for the Science Museum of Minnesota at the time, and my day ended at 4 p.m., right when Oprah's show comes on the air. Because I had no concept of how to use a VCR, I said to my boss at about 3:40, "Can I head out a little early? Madonna's going to be on Oprah and I really want to see it," to which he replied, in a very gruff and pissed off voice, "So now we have to compete with Oprah?"

Needless to stay I didn't get home in time to see the whole thing, and everyone knows the first 15 minutes are critical and set the tone for every show.

In the last year, I've watched more Oprah than I probably have in all the past year's combined. Mostly because I don't work as many hours as I used to, and also because I've been keenly aware that this afternoon television respite that has on occasion elevated me to the highest levels of human compassion is soon to be filed under the No More category.

People can say what they want about Oprah. That she's arrogant, that she's out of touch, that she's just a bit too big for her britches, but I will tell you this: anyone who tries to put something positive out into the world is to be admired in my book.

Anyone who has made a person think differently about even the smallest of things has made a tremendous impact in the world.

She has made me think differently and for that I am grateful and I will miss her daily show.

I still think she should have focused a bit more on scrapbooking, but what the heck. At least Lisa Bearnson got on there once.

With much gratitude and love,