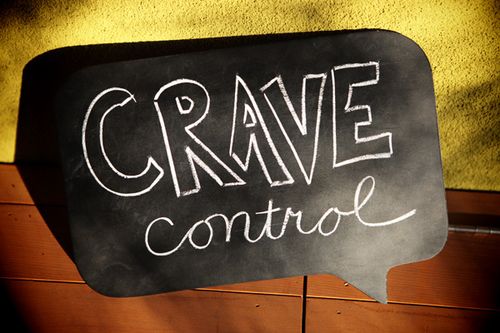 How many of you out there are presently smokers or are ex-smokers? A show of hands, please.

As a card carrying ex-smoker, I think I know a thing or two about cravings. Smoking on and off—but mostly on—from around the age of 12 until the age of 40, many years of my life were ruled by cravings.

For those of you who've never had the unfortunate experience of being addicted to nicotine, I'll tell you how it goes: you smoke a cigarette, then you put it out and the nicotine levels in your blood begin to plummet. The happy, contented feeling you had while ingesting the nicotine leaves all too quickly, putting you into a state of withdrawal from the minute your smoke break ends. So begins the cycle of addiction.

Back when I was a smoker, every November the Great American Smokeout would roll around. Ask any smoker out there and I'm sure they can relate to what I'm about to say: when you are knee deep in the hoopla of your addiction, the very last thing on Earth you'll tolerate is some one or some group telling you what you already know: Hey stupid, you should quit!

If anything, on the Great American Smokeout day, I'd just smoke more. I'll be damned if you're going to tell me when and how to kick my own habit. Imagine plugging your ears and going, "La, la, la, la, la, la, la" and that's the attitude I always brought to the table.

I've thought a lot about when I quit smoking during the past two weeks. I brought it up in a discussion with my therapist recently, who seemed impressed with both the depth of my love for my former habit, as well as my white knuckle, cold turkey, non-negotiable approach to quitting back in March of 2006. She was also amazed at the level of self-destruction it brought to my life on a daily basis, but we'll explore that tangent on some other day.

(Did you know I cried every single day for a week that March? I remember calling my dear friend Tara and sobbing, just sobbing into the phone because I seriously had no idea how I was going to get through it.)

But here's the thing: any time you do something you didn't think was even remotely possible, you gain a slightly new perspective on everything in your life.

Take for instance me and running. Here's a girl whose idea of excercise was simply to inhale and exhale on a Benson & Hedges Deluxe Ultra Light Menthol, and then take a nap. And now I run 3 to 4 miles, three days a week? Get out. No, I'm serious. That wasn't never part of my skill set.

After I quit smoking and started to gain weight, it still never dawned on me that I could figure out a way to work exercise into my life. Much like those annoying people who would dare to suggest I should quit smoking, I felt the same reaction towards their ideas of me moving my body.

Last night, I watched one of Oprah's "Life Class" epsiodes on demand, specifically, Episode 17, in which she talks about what would you do if you stepped out of your personal box of limitations. Now you know me and Oprah, if she says, "Jump," not only do I say, "How high?" but I also say, "Wow, I never looked at jumping like that," and "Who knew that jumping could have so many ramifcations?" and "My God, I LOVE YOU, OPRAH!"

She was talking about the idea of trying something different. That if you you want change, you can't keep doing the same thing and expect it to happen. You have to take a risk. You have to step out of your comfort zone.

I think back in January 2010, when I decided I'd had enough of inertia and chub and embarked on the whole Move More, Eat Well thing, I did it because I really had reached an understanding: ain't nothing gonna change unless I step up and do something. But in making that choice, especially doing it publicly, I was taking a risk of it not working.

With smoking, it was the same thing. No one is going to do this for me. I felt like I was playing a sort of Russian Roulette with my health; that it was just a matter of time before some smoking-related illness crept in and took a hold of my life.

The idea of cravings is on my mind right now in a big way. As I am preparing to embark on my 2012 workshop, my own familar ghosts of personal limitation are swirling around my brain, messing with me and trying to get me to just say when.

I know that there are many of you reading today who seek to feel better and stronger.  I also know that even though you might really want those things, the path to getting there can seem overwhelming. I know there are some of you out there who've resigned yourselves to a place in the box that you can't get out of, and I want to tell you that change is possible.

People are actually quite extraordinary in their ability to change and adapt. It's really just a shift in attitude and self-belief and the willingness to start.

What would you do if you had no fear of failure? And more importantly, do you believe that trying and failing and trying again has a value? Take it from this ex-smoker (who actually quit 5 times prior to 2006) and this chub fighter (who has lost and regained 20 pounds time and again): every time I fail at something, I have slowly but surely started to gain a sense of understanding and purpose from it.

What used to happen is I'd throw my hands up in the hair and say, "Screw it! I'm done."

Now, I keep my hands at my side and say, "Alright, how can I change my approach or focus to do what it is that I want and need to do?"

I know the end of the year is a time when we start to imagine the changes we want to make as of January 1st. It's that clean slate time; a chance to start fresh.

I just want anyone out there who wants change but isn't sure if they can make it to know, trying is the first step. Failing is the second. And trying again is both the third step, and a new way to re-frame your thinking towards making changes in your life that you can live with.

And you know what? Failure is an option. Just take it from me. It teaches me every single day. 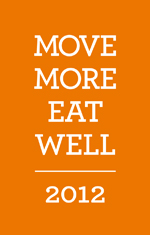 Join me in 2012 for my workshop, Move More, Eat Well 2012. In this class, we'll navigate the space in which women try to make positive changes in their lives for better health and nutrition. There's no whip being cracked during the class; just common sense ideas and the desire to make healthy changes in your life. We'll meet monthly to ask and answer questions related to the process of taking care of you and hopefully, find some things along the way that really do stick.