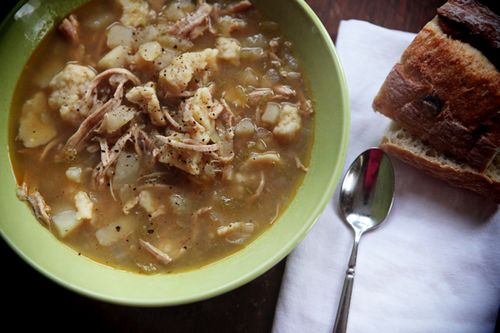 Let me clear something up first and foremost: Auntie Coo is not related to me.

Auntie Coo is my good friend and former colleague Amy Pampusch Olson's grandmother's sister. But I feel like she has given the world a gift in the form of dumpling soup and now I wish she was my auntie.

One night a few weeks ago, Amy posted on Facebook that she was making Auntie Coo's Dumpling Soup. The picture looked so good I begged her for the recipe. I never met a dumpling that I did not like. She obliged.

I have made this on consecutive Sundays and I am not going to lie: it is the greatest soup I have ever tasted, made or been a part of in any way, shape or form.

Yes, I love it that much.

I wanted to share this recipe with you today for those chilly winter nights when you want something homey, hearty and insanely comforting.

Salut! And all hail Auntie Coo.

ABOUT AUNTIE COO: Auntie Coo was born Cleo Gravley in Windom, Minnesota. She worked for the telephone company her whole life and traveled around the world after retirement, bringing Amy gifts such as rocks from the Black Sea. She was essentially Amy's grandma. She got her nickname because someone couldn't pronounce her given name, Cleo.

Note: Auntie Coo's original recipe does not include chicken or celery. I have added those to my version. See PDF for complete recipe instructions.

And again, all hail Auntie Coo.