I like to give a lot of razzing to my good friend Tara, who gets a real thrill in life when on the hunt for all things old and smelly, or what some people like to refer to as vintage.

Okay, maybe it's not all smelly stuff and maybe she's consciously seeking items coated with the ancient epithelial cells of people from the 1900s for reasons other than health code violations. Suffice to say I don't share her love of vintage.

You can't write a book touting clean and simple scrapbook page design and then brag to people about the 600-year-old tea cozy you scored at the Goodwill over the weekend. No one's buying that story in a billion years.

And yet I could have not been more shocked to learn that it turns out I actually am into vintage. And smelly vintage at that. Or at least part of it was smelly. 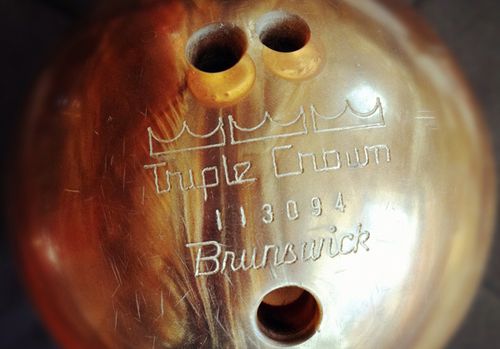 Shirley MacDonald bowled in a womens' league when I was growing up. She says she wasn't anything to write home about, but hey, she had her own ball and her own bag and her own shoes. In my book, that makes anyone plausibly legit.

When I was going to school at the University of Texas–Arlington in 1986, one of my required courses was Physical Education. Yes, college-level P.E. credits were needed to graduate, and four semesters of them. So I signed up for the activity requiring the least amount of physical exertion on my part—bowling. Afterall, I needed to save my energy for smoking and drinking coffee and writing really awful poetry in the student union.

Her league days long since behind her, my Mom gave me her old brown Brunswick ball and I took it into a pro shop and had the holes redrilled to fit my hand.

Turns out, I was a damned fine bowler. My all time high score? 234. I'm not making that up people. I also aced all of my written finals. You see, I studied not just the game of bowling; no, I also studied the college-level manual. I became a scholar of bowling.

The years came and went without much bowling in my life here in Minnesota. Oh sure, Dan and I would hit the alley from time to time back in the early 90s, back when you could smoke and drink yourself silly all while attending to the tedious task of keeping score by hand. My God, how did we manage?

The years have been peppered with trips to the alley, but to be honest, I sort of forgot about the shiny brown ball in the basement.

A year ago, Dan's brothers and sisters planned a sibling night out. All the sibs and their spouses or significant others would gather in winter for some fellowship and merriment. Our choice? Bowling. It was so much fun that we decided to do a repeat for this winter's family outing.

But this year, I remembered that ball in the basement.

Now I'm not saying I smoked anyone. But the first frame I bowled? A spare. The second? A spare. Compared to last year, where my highest score came out at around 56, I was on a roll. So to speak.

I swear to you, it was the ball.

I bowled a 132 and a 124 respectively. To be sure, nowhere near the glory days of my college years, but part of me said, "Oh baby, you still got it in there somewhere."

It's funny that me, a person who is more or less averse to all things vintage is finding such a happy kinship with this newly rediscovered ball.

But the bag? Holy hell. This thing smells like it belonged to the president of the Crypt Keeper Bowler's League. 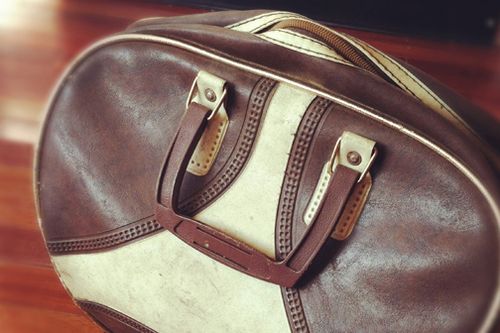 I know. It's the coolest looking thing since rub-on alphas, but trust me: it smells like the Civil War.

I'll be ordering a nice modern replacement bag soon. The zipper requires WD-40 just to get the thing open and closed, and the ball base is no longer attached to the bottom of the bag, serving zero purpose as the ball just rolls around in there. And then there's the smell.

But at least I've found a connection to something that's kind of vintage. Maybe Tara's not so nutty afterall.

I mean this old thing has been passed down not from some ancient stranger whose story I'll never know or whose dead skin cells I will need to fear breathing in, but from someone I know and love, my Mom.

And she's a pretty okay vintage thing herself.