Last Saturday Cole wanted to go for a bike ride around the lake near our house.

The route is roughly 4 miles and you should know that I've only recently decided that it's okay for my 12-year-old son to tackle it on his own. And by recently, I mean on Saturday.

Now I'm no Helicopter Mom but let's just say that yes, I do have a protective bone or two in my 46-year-old body and yes, I have been known to worry more than a well-adjusted adult might be wont to. So despite my gut level reservations, I simply responded with, "Okay buddy, be careful at the street crossings!"

It's just so different from when I grew up. When I was 12, I would hop on my bike in the morning and take off exploring through the woods by my childhood home without a care in the world. Actually that's not true. I did grow up with an irrational fear of being kidnapped but that would make sense because I grew up in the 1970s and it always seemed like some horrific story would surface often enough to keep you on your toes and remind you that being buried alive in a box wasn't completely out of the realm of possibility.

But this story isn't about me, surprisingly, it's really about a case of mistaken identity.

A little backstory: Cole was really affected by the Kony 2012 media blitz and viral campaign. Most of you have probably heard of Kony and that is an example of what savvy internet use can get you: noticed. Cole was so moved by the story of the Invisible Children and the atrocities, he wanted to participate in the Kony campaign's "Cover the Night" event on April 20, where people would go out and post flyers in every city across the globe, again with the goal of raising awareness for the Kony campaign.

But you see, Dan and I had tickets to see a show; Aidan doesn't drive yet and had plans to go to a concert; and Cole, well, he was sent over to his cousin Luke's house so he didn't really have an opportunity to get out there and support a cause he personally believes in.

And that was that.

But on Saturday morning he headed out for his ride and while he was gone, I had to drive Aidan to a rehearsal for an upcoming production of Bye Bye Birdie. As we set off down the main drag by my house, I saw Cole in the distance, heading back towards home, awkwardly biking and holding a bunch of red flyers in his hand. We passed him and waved and I noticed flyers on every street light pole that all said the same thing: 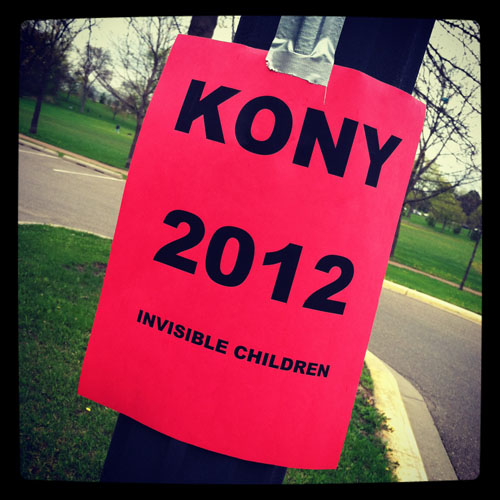 My heart swelled in my chest, full on Grinch-style, as I turned the corner to see more and more of these red flyers blanketing every street light along the road we were driving.

I got teary-eyed at the thought of my son, unbeknownst to me, heading out after the fact to put up his home-made Kony flyers to help spread the word in our little Como Park neighborhood.

I was ridiculously proud to be his Mom.

I returned home, walked into the house and just wrapped my arms around him, giving him a big hug and that's when he told me: "Oh, Mom… I wasn't putting them up… I was just putting them back on the poles, the ones that had blown off. I was just out for my ride and saw all these flyers all around the lake."

But you know what? I'm still ridiculously proud. Whether it's my kid or your kid or some kid I'll never know, the fact that they are filled with enough passion and motivation and belief to get out there and try to make a difference… well, that's the best of what this young generation—heck, any generation—can offer. The hope and belief and conviction that they can make a difference.

True, there is some controversy around the campaign and the organization and Lord knows if you Google it even a fraction, you can get eyefuls from both sides.