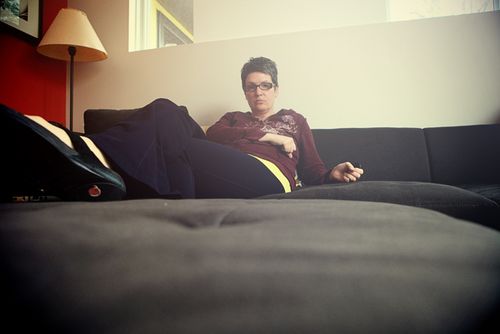 The last 30 days have seen my efforts to Move More and Eat Well fall somewhat flat. And by "flat" I mean the Eating Well part has included copious amounts of sugar and other white foods, and the Move More part has been plagued with ticky tack little injuries. Back pain here, calf pain there…you know how it goes. Yo! I'm 46 y'all. No one said it would all be smooth sailing.

I guess you can't do NOTHING physical and just smoke for 25  years and expect your body to happily reward you.

That said, I realized the other day whilst pounding it out on the dreadmill that I'm sure grateful for music while I try to get my Moving More back on track. I thought I'd share some of the songs that for whatever reason, when they magically appear in my shuffle mix, I magically believe I can run another mile. Or two.

I know it's old, and maybe a bit dated, but there is a driving baseline that just propels me forward. Chris Robinson rocks it out. And I will admit to you something I'm really embarrassed that I never knew: this is a cover of an Otis Redding song. What?

Another song that I love to run to is "Too Funky". I love George Michael. I did then. I do now. I used to imagine, back in 1984, that he could be my boyfriend. Ah, the folly of my youth. George, you will always be Whamtastic to me.

I realize at first glance, you might think, "What? How is this a song that gets you going?" But you're going to have to stick it on a mix and see for yourself. Granted, this version is a bit stripped down, but the song itself makes me instantly feel about 32 pounds lighter. And I love the idea that I'm doing something "fantastic" like, well, running. Plus, I have always had an insane crush on Ed. His guitar playing is sublime. I'm sad that Ed and Steven are no longer together in the group.

You cannot stop running if this comes on. You just can't. Not possible. Nope. Not happening. Plus, when I hear Dave Grohl's little breathy voice, I melt. It's true. I would hump his leg. (NOTE: That line is not for the children.)

I realize my cool factor just dropped a few notches in the eyes of some, but for some reason, if this song comes on at the end of the run, it gives me a boost. Plus, I like to sing as I go… come out, come out, come out, Virginia don't make me wait…

So now it's your turn: what song will get you up off the couch and moving, or if you're already out there, what song powers you through?

Don't worry, it can't be as embarrassing as Billy Joel.