Last weekend, me and one of my oldest and dearest friends had a date for a dinner and a concert.

That friend, Ania, former expat now living in the United States for the first time in about 15 years, is always game for a night out and when I told her I had two tickets to see Gotye in concert, she said, "Hey, I love that song."

And really, at this point, who doesn't?

Aidan was a bit peeved that it was an 18+ show. She had really wanted to go, but being the responsible parent that I am, I refused her numerous requests to procure a fake I.D.

With the e-Tickets freshly printed, Ania picked me up promptly at 5:45 and we headed out to dinner at one of my favorite Minneapolis eateries, The Birchwood Cafe. Ania, a seriously hard-core and well-seasoned foodie had never been there, so I figured I'd take her someplace to impress, despite the casual nature of the place.

We shared the grilled romaine salad and each had a delightful spring vegetable hand pie for our entree, served with a side salad of tasty micro greens.

We followed it up by splitting a delicious slice of carrot cake and two cups of coffee, mine a full strength.

That was my first mistake of the night.

We made our way into Minneapolis, parked and as we walked from the ramp through the skyway, we saw the line outside the venue for the show wrapped clear around the block and Ania said to me, "We could just hang out here until the start letting people in. I mean, no sense in standing down there and being chilly, right?"

No sense at all! Love how these newly repatriated Americans think!

So we waited in the skyway—and for those of you not familiar with cold climate downtown metropolises, they are connected with covered, heated walkways called skyways (the Replacements wrote a great song about them back in the day)—and we just stood up there and there was a part of me that thought, "Hey, let's go back for a second dessert and call it a night," but then I hushed that old granny lady up and we eventually made our way down to the street and into the line.

You forget, standing in line to get into a show, how many people out there get a huge jump on the drinking portion of the night. The two women behind us—one of them who apparently had been drinking wine since noon—were loud, drunk and smoking, two things I used to be and do. Okay, maybe sometimes I'm still loud, I'll grant you that. But I couldn't help putting my hands over my nose and calmly saying to myself, "A cigarette can't last forever."

I wanted to turn around and say, "Hi, you know, I bet you love that cigarette and let me tell you, girl friend, I KNOW that love, for reals, but you know what? You should try and quit now so you don't do it like me and realize at 40 you're going to be playing Russian Roulette with your health year in and year out by lighting up every single day of your life. And when you do decide to quit, it's going to be the hardest, most emotionally and physically challenging thing you ever, ever do in your entire life. That, and you stink," but something in me said, "Hmmm. Maybe not say that," and I just stood there with my hands covering my nose.

Because hey, the line was moving.

Another thing you forget when you are 46: bands take a hella long time to come out and play. Also erased from collective 40-something memory? How much general admission sucks.

Ania and I aren't big drinkers, as in we had zero alcohol in our bodies for the start of the show.

That was my second mistake of the night.

One thing you notice when you are not drinking is just how drunk other people around you are. Oh, sure… not everyone in this club was hammered, but there were enough memorable folks to make an impression. Like the dude who kept leaning on me and holding his drink over my head and who was trying to make it through the crowd to his sister/wife (we couldn't tell what she was, because he kept saying she was different things). Or this bearded dude and his little girlfriend who just decided that I wasn't occupying any physical space that mattered, as they pushed me aside to stand in front of me.

By the time Kimbra (opening for Gotye, and a fine act indeed) came out, I was nearly ready to call it a night at 9 p.m.

Ania and I had an agreement. When I squeezed her arm in a certain way—you know, it was too loud in there to clearly communicate, and older people need a back up plan—it would mean this: I am freaking out in this crowd and would like to move to the back of the club where the older people are.

We managed to stay up near the stage until Gotye came out, and even though there were about three 6'4 dudes standing in the front row, I did manage to see his adorable face clearly and I took one photo of him with my iPhone. I paired that with the one shot I took of Kimbra. 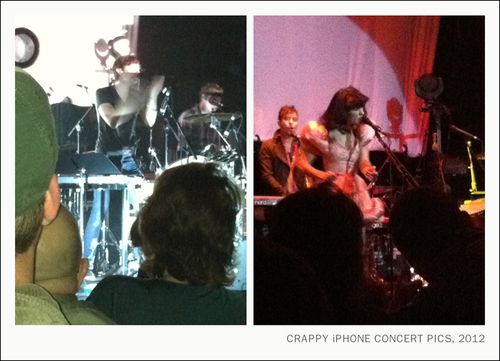 After about 5 songs, I'd had enough and I squeezed Ania's arm in that certain, predetermined way. We moved to the back of the club and just as I was heading to the loo, wouldn't you know it, the hit came on. This is the photo I took of a video screen in the back of the club. 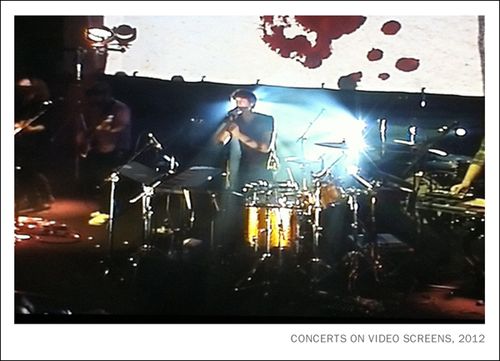 Ah… rock and roll, the way nature intended for a sober, 46-year-old woman to experience it.

It sounded like a frat party sing-along at that point. You couldn't even hear Wally singing over the off key chorus from the standing room only, mostly inebriated crowd.

And that's when I realized I'd become my grandfather.

We stayed through the end of his set, watching the show from a video screen on the upper level of the club. We decided to skip the encore, you know, to avoid the crowds and such.

Once home, I came upstairs and crawled into bed. Dan woke up to ask how the show was and I simply said, "I'm thinking my club venue show days are over."

And with that, thanks to that cup of full strength Joe earlier in the evening, I layed awake until 2:30 in the morning, tossing and turning and reminiscing on my late 30s when I could hold my liquor and stand for more than three hours without experiencing mild to moderate back and calf pain.

Yes, those were the days. Get off my lawn indeed.