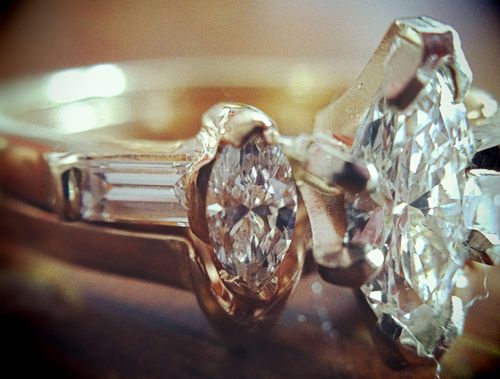 My wedding ring has been broken for nearly two years.

A few weeks ago, I finally ponied up the cash to get it fixed. A small stone was missing and apparently—according to the experts at Kay Jewelers—the entire ring was on the verge of collapse. They could not believe I'd never brought my ring in for servicing in its 20-plus-year lifespan.

Funny how my ring is a metaphor for what's been happening in my marriage for the past several years.

Stuff was missing, it was on the verge of collapse and not once in its 20-plus-year lifespan had it been in for servicing.

I've talked very little here on my blog about my love life which is funny, because working on my marriage to Dan has been the single most dominant thing in my life since February 2010 when we decided to see if we could tinker with all the messed up stuff beneath the hood.

Part of this decision has been to preserve privacy for me and my family as we fumbled our way through. Part of is because I was shocked to find out it wouldn't be a neat and tidy process that I could sum up in a quippy, heart-warming blog post. .

I mean, who wants to come online and say, "Guess what? I've been a horrible person in my marriage and in my life?"

Who wants to admit to finding out that one of their core problems is complete self-absorbption?

Can't I just talk about being chubby and learning to run and scrapbooking?

I was one of those people who thought marriage counseling would finally, for the love of God, get me what I wanted out of this thing. I thought it would be a referee match of sorts and that I would come out on top in at least half of the battles.

I mean, come on! I've got to be right at least half of the time, right?

But the past two years have been about uncovering my own dsysfunction; about trying to learn why I am the way I am and how destructive my ways of being have been. To myself and especially to my family.

And I ain't gonna lie: I have done most of this kicking and screaming. You can ask my therapist. I'm fairly certain she'll vouch for me on that.

But this year I decided to board her train. I stopped fighting it and decided to join her and see what could  happen.

And do you think it got any easier? Not really. But in order to make the changes in my life that I want to make, for myself, my husband and my family, I need to be connected to reality and to really see myself accurately. Painful as that has been and continues to be, it is what is needed.

It is what I continue to work on. Every day. And there is no clear cut path. Some days I get it. Some days I don't. But the change here is that I'm finally becoming aware of who I have been and who I want to be.

That's the contrast that will make real change possible.

So are Dan and I in the clear?

No. But really, no one is in the clear. Life isn't in the clear. And anyone who thinks that it is might as well be living in Fantasy Land, USA. I know this because I was the mayor of that town. Hell, I wasn't just the mayor, I was El Presidente Supremo.

Someone emailed me the other day to thank me for being honest about my marriage on this blog, which is what propelled me to write this today. I know there are people out there who have a lot of pain, sadness and disconnection; people who want so much to change things; to save things.

Marriage is hard. Sometimes people have to fight like crazy to keep it going. And that takes two people in the fight, both greased up and willing to dig in and get really messy.

I am so incredibly thankful that I married a man who is in for the messy longhaul.

We are in a much more solid place today.

But the work continues.