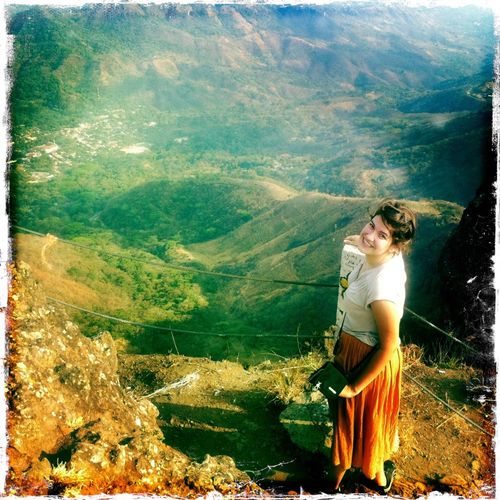 Aidan Zielske in the mountains of San Salvador, March 2012.

I told you last week that my girl, my first-born and only daughter, was heading out for a mission trip to El Salvador with our church and that Dan and I would not be accompanying her on this journey.

I posted a baby photo of her and made light of the fact that I would be curling up into a ball until her return.

Funny. I didn't think I would actually want to do that.

Aidan is still on her trip as I post this, not due to return until Wednesday night.

I didn't expect to find myself purposely trying to put the fact that she was over 1,000 miles from the safety of my arms out of my mind just in order to get through the day.

I didn't expect to feel so unsettled and out of whack the way I have.

I posted to Facebook a few times last week, this being one of them:

At the time, I was being flippant, but as the days have gone on, I have been overwhelmed at the depth of this missing her.

I know that one of my jobs is to raise children who will be able to leave this nest and find their own ways in the world. Theoretically, I get this.

You don't really think much about this, however, when you decide to go off the pill in 1995 because suddenly you've had a sudden and unexplained change of heart in your previous, "I'm not having kids" position and figure, "What the hell? Let's DO this!"

I'm not going to lie to you. I was not the best mother in the early years of my childrens' lives. I'm not just saying that for dramatic effect either. I'm saying that as a direct result of doing therapy for the past few years and because I have learned a lot about who I am, who I was and how I operated in the world.

And as a result, it limited my ability to truly see my children.

Today my focus is to see and know and learn everything that I can about who they are while they are still under this old roof on Sheldon Street and while I still have the time to do it.

I know some of you out there reading have already passed through this door, watching your children move out into the world with grace and hope, and with trials as well, both for you and them.

I know some of you out there have children clinging to your legs from dusk until dawn and you're simply trying to get one load of laundry done and a hot meal on the table by 7 p.m.

I know some of you have children with special needs and their futures may be less predictible and may not follow the traditional trajectories of life.

I know some of you are like me. You're on the precipice of the time when they will soon be leaving the safety of the four walls you've created and you're beginning to feel the pangs of whether or not you did enough and of how you're going to adjust with one less warm and delightful body living under your roof.

I guess what I'm connecting to is the pain of the years when I could have been doing so much more as a mother, but also to the gratitude of being so very thankful for the time I still have in the here and now to give them everything that I can, knowing what I know now.

I love how Oprah always quotes Maya Angelou when she says, "When you know better, you do better."

It feels like a wonderful shot of hope and forgiveness as well as a challenge: do better.

I cannot wait until Wednesday night, when I get to stand at the baggage claim at the Minneapolis/St. Paul International Airport and enfold my daughter and tell her how much I love her, and to then hear all about this amazing adventure she's been on.

I cannot wait to get her back home and continue to do better as her mother.

I'm so very grateful for that chance.