The other night, I made a pizza that if I’m being brutally honest, it was perhaps the single best tasting concoction that has ever been served at the House of Zielske.

I decided to re-create the famous—or at least famous in my neck of the woods—Pizza Luce Garlic Mashed Potato Pizza. The ingredients are simple: 1.5 pounds of red potatoes, boiled with about 6 cloves of garlic, then mashed with a little butter and potato water. Feta cheese. Scallions. Chopped tomatoes (some red, some yellow). And pizza dough.

Super simple. Totally winged it. And completely nailed it.

The other day, I was flipping through old scrapbooks and came across, if I’m being brutally honest, perhaps the single greatest scrapbook page in Cole’s entire collection.

It was a page I made in 2004 documenting his love of all things disaster-related, and appeared in my book, Clean & Simple: The Sequel. It wasn’t because it was the greatest design (it wasn’t) with the greatest photos (they weren’t). It was because it so fully told the story of something so specific from Cole’s life at the age of 5. As I read the journaling, I remembered him to the point that I could almost smell that 5-year-old boy as I recalled him rattling off the facts about the ill-fated Titanic in rapid fire succession.

It captured such a pure aspect of his ‘all-in’ personality and in that moment, I was so grateful that I stumbled into a scrapbook store all those years ago.

I was so grateful to have this story on paper. With some photos and some glue. 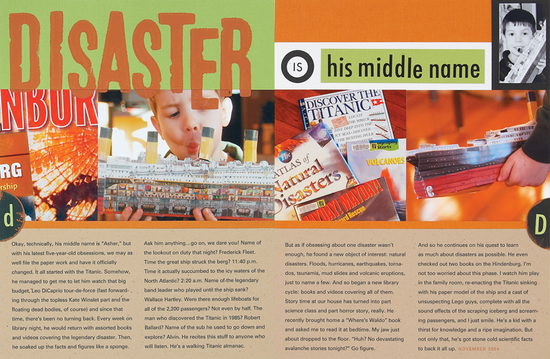 JOURNALING READS: Okay, technically his middle name is “Asher,” but with his latest five-year-old obsessions, we may as well file the paper work and have it officially changed. It all started with the Titanic. Somehow, he managed to get me to let him watch that big budget Leo DiCaprio tour-de-force (fast forward through the topless Kate Winslet part and the floating dead bodies, of course) and since that time, there’s been no turning back. Every week on library night, he would return with assorted books and videos covering the legendary disaster. Then he soaked up the facts and figures like a sponge.

Ask him anything… go on, we dare you! Name of the lookout on duty that night? Frederick Fleet. Time the great ship struck the ‘berg? 11:40 p.m. Time it actually succumbed to the icy waters of the North Atlantic? 2:20 a.m. Name of the legendary band leader who played until the ship sank? Wallace Hartley. Were there enough lifeboats for all of the 2,200 passengers? Not even by half. The man who discovered the Titanic in 1985? Robert Ballard. Name of the sub he used to go down and explore? Alvin. He recites this stuff to anyone who will listen. He’s a walking Titanic almanac.

But as if obsessing about one disaster wasn’t enough, he found a new object of interest: natural disasters. Floods, hurricanes, earthquakes, tornados, tsunamis, mudslides and volcanic eruptions, just to name a few. And so began a new library cycle: books and videos covering all of them. Story time at our house turned into part science class and part horror story, really. He recently brought home a “Where’s Waldo” book and asked me to read it at bedtime. My jaw just about dropped to the floor. “Huh? No devastating avalance stories tonight?” Go figure.

And so he continues his quest to learn as much about disasters as possible. He even checked out two books on the Hindenburg. I’m not too worried about this phase. I watch him play in the family room, re-enacting the Titanic sinking with his paper model of the ship and a cast of unsuspecting Lego guys, complete with all the sound effects of the scraping iceberg and screaming passengers, and I just smile. He’s a kid with a thirst for knowledge and a ripe imagination. But not only that, he’s got stone cold scientific facts to back it all up.

I think the best recipe for scrapbooking is just to tell real stories in all their everyday glory with as much detail as you can muster. Perfect writing isn’t required. Just tell it like it is. Photos and design are always nice, but they will always take a back stage to a fully realized story.

Be storytellers, people. Your future you will thank you.