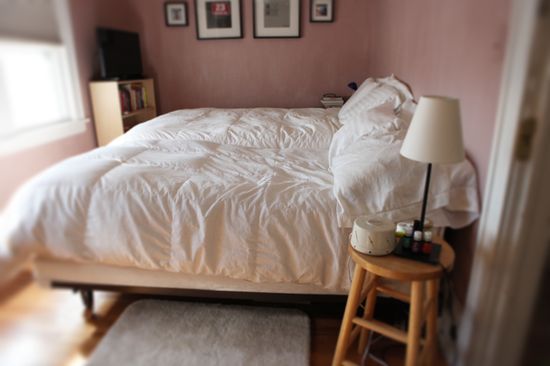 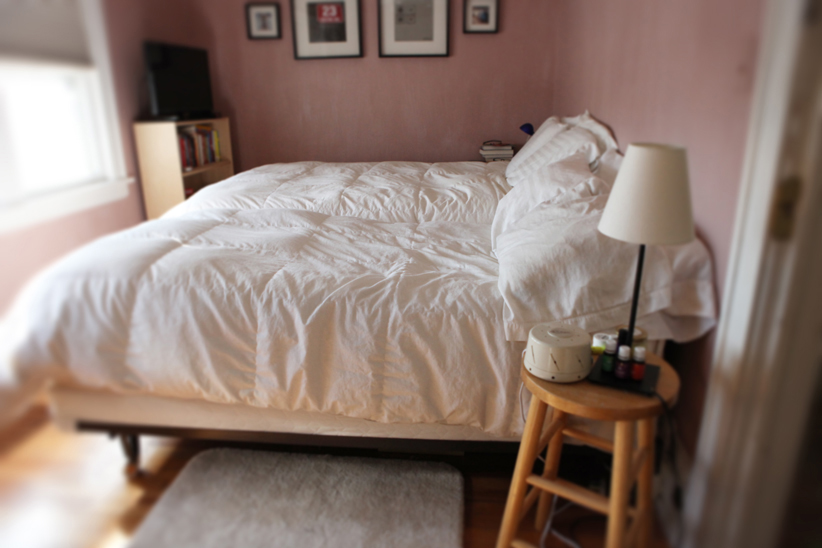 I have trouble sleeping.

I’m not alone. Nearly 40 million men and women suffer from sleep disorders, ranging from insomnia to sleep apnea to snoring, just to name a few.

I haven’t slept through the night since I was a teenager. That said, during my 20s and 30s, I could fall sleep anywhere and pretty much at any time. Hardwood floors with a blanket? Done. Naps at 2:30 p.m. and still be able to fall asleep later that night? Yes, please! Sleeping was something I did with confidence and ease. I never imagined it would fall into the “Great, Now That’s an Issue, Too” category. I never viewed it as a luxury.

In 2009, it reached a breaking point for me. I started to have what I can only describe as near panic attacks at bed time. The cause? The anticipation of yet another wrinkle in my already-challenging quest for sleep: my husband’s snoring.

A little backstory: we have no spare rooms in our home and at the time, we had precisely zero couches that you could comfortably grab a few Zs on. After a few completely sleepless nights—and I wish I remembered this more clearly—I basically freaked out and begged Dan to sleep on our futon couch.

And what do you know, he actually agreed.

I won’t say it solved my sleep problems, but it solved my pre-bedtime anxiety issues. I had the bedroom to myself and I felt simultaneously overjoyed and sheepishly guilty.

There’s another piece to this story that has to be included: this all happened about three months before Dan and I started working with a therapist, a woman we still work with to this day. See, things weren’t really all that great between us. On the surface, we looked like any other normal family, but below the shiny veneer we were kind of lost and lacked any real understanding of what the hell was going wrong in our marriage.

Dan told me, weeks after moving to the basement, he felt a sense of relief and freedom from the guilt I was heaping onto him for keeping me awake. It was a relief for him to not be around his difficult wife. And believe me, if I was ever having issues, he was the first person I would blame tell.

Let’s put that aside for a few minutes, okay?

Dan is not a crazy snorer. He does not saw logs in his sleep. That said, I am the lightest sleeper to ever walk this green Earth. So any snoring of any kind, to my ears, sounds like an auditory assault. But having Dan live in the basement wasn’t a viable, long-term solution. Imagine that!

So eventually I purchased a sound machine, numerous boxes of ear plugs and a second bed.

We pushed our queen bed to one corner and the new twin bed to the other of our decidedly small “master” bedroom. Combining that with the artificially generated white noise, ear plugs and 6 feet of separating distance, we began the experiment of two people and two beds.

And it worked. Ward and June Cleaver be damned. (And yes, the work we’d been doing in therapy didn’t exactly hurt, either.)

I remember, however, hoping that no one would come over, glance into our room and upon seeing two beds, wonder, “What’s going on with them?”

In fact, when I bought the bed from the Macy’s Home Store, I told the sales person I needed a bed for a spare room because a relative was coming to stay. I invented both a make-believe Aunt and a spare bedroom rather than explain my weird solution for my sleep issues.

Of course, the truthful answer would have been: I am working on my marriage, my personal development and better sleep, but at the time I was afraid to share this story out of shame and the fear of being judged by others.

Today, I don’t have that particular fear. And guess what? Nearly everyone judges everyone all the time. I speak from personal experience and that’s one of the things I’m consciously working to change in myself.

Today, we have pushed the beds together to create what we affectionately refer to as our Super Bed. I sleep a little better. He snores a little less. I still have nights where I can’t sleep. I toss and turn like a fish on a dock. Hot flashes have introduced yet another sleep wrinkle. I try all kinds of things: lowering my caffeine intake, avoiding blue light devices in the evenings, melatonin tabs, valerian tea, diffusing essential oils. I do not walk around sleep deprived. The quality of sleep I get, however sporadic, is enough to keep me healthy and alert.

And we continue to work on our marriage almost every day.

My therapist told me two things: 1) some couples cannot sleep in the same bed for very real reasons and 2) I was punishing Dan by making him live in the basement.

I’m still working though Number 2 and the truth behind it. There are still nights when I snag sleep on our newer couch that can accommodate a human body comfortably.

But I share my tale of two beds because sometimes you have to try all sorts of things to make something work.

Sometimes it helps to realize that the nuclear idea of happily snoozing couples isn’t necessarily reality for everyone.

And sometimes, doing something unconventional is exactly what is needed.