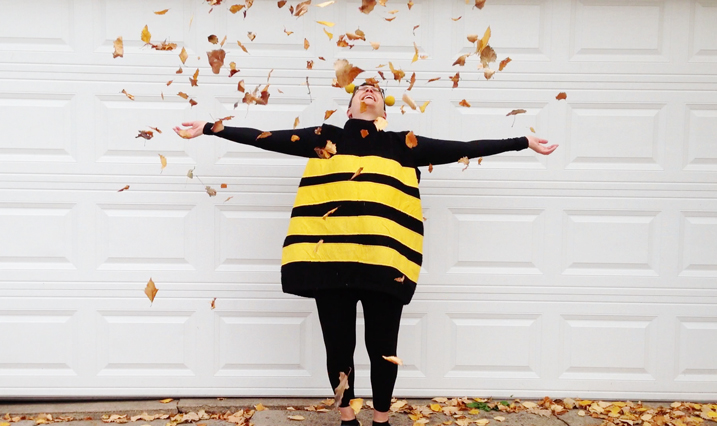 Do you know the story behind the bee dance? Would you like to?

It all started back when I was about 14 and my mother made me a bee costume for my job at the RollerFair Skate Deck in Everett, Washington.  She filled the suit with balloons, dropped me off at the rink and thusly a tradition was born. I had long been under the belief that she made me a second one for me when I was in college but she swears, “Nope. It’s the same costume.” Talk about quality craftswomanship!

Save for a few years where I branched out into other looks (one year, I dressed like Dan—and he like me—which resulted in a fight as we impersonated what we felt were each other’s worst traits; another year I busted out my wedding dress), I have been dressing like a bee on Halloween for more than half of my life.

So I did this. You’re welcome.

Enter Halloween 2014. The pressure was on. I couldn’t just do the same old, same old. I mean, okay, sure… I probably could have, but I felt it was time to take it up a notch.

The problem? I’m not really a videographer by trade.

So I hatched a plan: I would take my iPhone 5, my tripod (complete with my Joby GripTight, which holds your phone securely onto any tripod), and I would head out into a semi-secluded wooded area to film some clips. It had to be semi-secluded because believe it or not, I’m an introvert and we don’t generally feel super comfortable making asses of ourselves in public dressed as giant bees.

But here’s the deal with something like this: you have to go big or go home. Half measures will not do.

Then I returned home and filmed the key dance sequences in front of my garage which faces an alley. Yes, one of my neighbors did happen upon my video activities. I smiled at him, shrugged and said, “It’s just this thing…” He nodded approvingly but didn’t seem to need any more information than absolutely necessary.

Then it was time to choose a song and begin the editing process.

Initially, I had the song choices narrowed down to two: All About That Bass by Meghan Trainor, or Shake it Off by Taylor Swift. Both would have been great, but both would have required far more dancing than I was prepared to do.

Because you should know this right now: I have no formal dance training.

Then I saw this sketch on SNL and I thought it was funny, but had no idea it was inspired by this video (because I’m not up on the latest everything, people—I’m middled aged!) And that’s when I knew: I have my song.

The other thing I knew had to be a part of it? All clips in slow motion. The general rule of thumb in all video dance segments: if you can’t dance, it’ll look better slowed wayyy down.

I built the entire video using Screen Flow, the software I used to record all of my class screencasts. It’s not really meant for this sort of thing, but it actually worked just fine.

Lastly, I enlisted some video help from Aidan’s boyfriend Aidan’s Dad (hey, Dave!) who does this sort of thing professionally. (Video, not bee dances.) And I managed to export a nice, HD version of what you are about to see.

So much for without further ado, right?

To get the full effect, click on the full page view icon in the lower right side of the Vimeo screen and let’s hear it for having fun in the middle ages.

Buy the song on iTunes here.