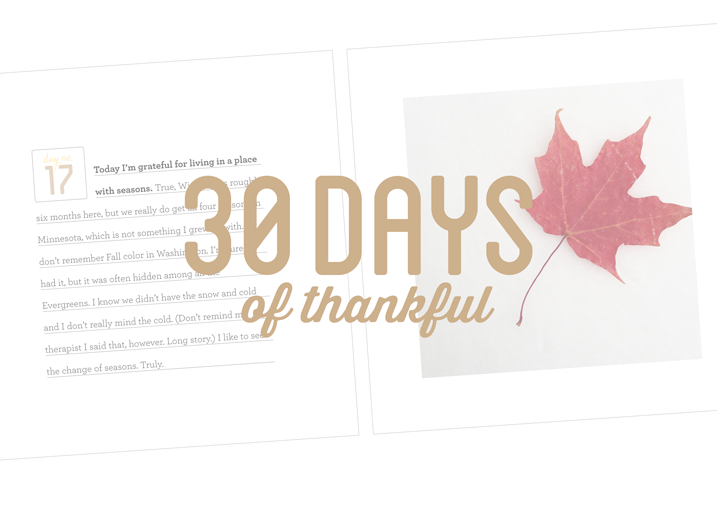 I’m just over halfway through my 30 Days of Thankful album project for November and I feel fine. I’ve been documenting my gratitudes every few days and I’m going to let you in on a little secret: I totally dropped the ball on my traditional album. I started with the best of intentions. I decided to do a digital version (to create a book at the end of the month with Artifact Uprising), as well as doing a 4 x 4 mini album version. While I’m caught up with the digital version, the traditional version has stalled out at roughly Day 8.

It’s not that I don’t want to go back and hand-write the entries I’ve already typed up in the digital version. I do. And I will. At least I think I will. Won’t I?

Storytelling has to flow for me. It has to find the clearest method for connecting my thoughts in a logical, even lyrical way. I used to think it was my handwriting that tripped me up. It’s not that. My handwriting is fine. More than fine. However, my brain simply doesn’t work the same when I have a pen in my hand. The method I find the easiest? Typing. Yo.

I wanted to share some of the pages I’ll be adding to my final book. If you like the idea of this but think, “Oh, I’m too late to jump in,” you can still do the project. Plus, all of the digital packages (including printable cards for non-Photoshop users) are on sale this week for 40% off. Click here to see what’s on sale and click here for more information on the project itself.

Note: There is one day missing as I felt it was too personal to share. I know, strange but true. Also, there is a typo in an image. Also, there may be more typos. Proofreading is my weakest link.

If you click on each image, it should open in a larger viewer.

And the project marches on.

I plan to share how I organize my digital files in preparation for creating a book during the first week of December. Questions? Comments? Typo catches? By all means, shoot!