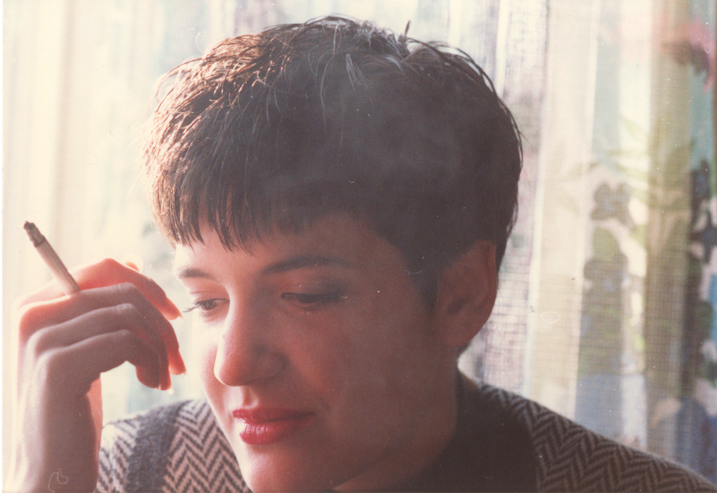 This is not a cool photo.

Taken in my then boyfriend Dan Zielske’s bedroom on one of my visits to see him back when I still lived in Texas, I had one goal in mind: look cool.

By the hipster visual standards of today, it kind of IS a cool photo. I mean, hell, there’s no Instagram filter on this, people. That hazy look you see? Pure, American-grade tobacco smoke courtesy of a Benson & Hedges Deluxe Ultra Light Menthol.

Yesterday was my 10th anniversary of quitting smoking for good. I knew it was coming as the anniversary coincides with St. Patrick’s Day but somehow I didn’t really think to reflect on it until the day was upon me. I can still remember that first day back in 2006. I knew it was time. I was 40. I was thinking about cancer a lot. I was tired of having my life ruled by the schedule of an addiction.

I also had an impending trip to New Zealand to teach at a scrapbooking convention and knew there was no way in Hell I was going to make a 14-hour flight smoke-free. At least not as a pleasant, functional adult.

That March morning 10 years ago, I planned to stay anchored to my bed with sweets, snacks and television—whatever I needed to make it through the day—and I told Dan he was fully on kid duty. I was officially out of commission.

But then he had someone call in sick at the coffee shop and off he went for the day.

I broke down and sobbed. There is NO f#cking way I am going to be able to do this!

But I did. I don’t remember quite how, but I did.

Then I made it through another day. And then another.

And here we are 10 years later.

I think people look at smoking and think, sure, it’s disgusting, it smells and it’s bad for you and everyone around you, but it doesn’t affect lives in the way that alcoholism or drug addiction does. I would agree with that statement, with a caveat: it did change the way I lived my life. It changed the way I parented. It changed the way I presented myself publicly. And it turned me into an Olympic-caliber liar.

I kept smoking a secret from as many people as I could. From my parents. From my in-laws. From many of my professional colleagues. From my kids. I built my days around when and where I could smoke. And it was at times an exhausting task.

For many years, when I worked a corporate job, while my employers knew that I smoked, I don’t think they realized that every time I was acting like I was going to run an interoffice errand, I was actually heading up to the rooftop smoking area where I stashed my smelly winter jacket year-round to pop out into the frigid Edina, Minnesota air to get that nicotine circulating in my system.

At home, I would sneak out to the porch or the garage every  hour on the hour, coffee in hand, mumbling quickly to the kids that I was taking the trash out. I would take the trash out 6 to 10 times a day. I wonder if the kids thought, “Our carbon footprint must be insane!”

In a further effort to keep it hidden from the kids, I would be less physically affectionate with them until I had a chance to wash my hands, brush my teeth and throw a spritz of perfume on. Just so they wouldn’t smell it.

There is real pain and regret in this for me… that I would prioritize my addiction over giving my kids warmth and affection with no limits. Just because I didn’t want them to smell it. Just so I could maintain an illusion. What a waste of incredibly precious time all in the name of protecting my addiction.

But once I got through the first few weeks, life looked different. No more lying. No more avoiding those beautiful kid snuggles and hugs until I’d washed my hands and brushed my teeth. That alone was the reward that kept me going. That I could stop pretending I wasn’t a smoker.

Because I wasn’t anymore.

So here’s to 10 years. There have been times when I have looked back at that 11-old-girl who decided to try smoking and felt a real sadness for her, that she would feel the need to fit in and belong so desperately… that she was looking for something in choosing a risky behavior to fill whatever hole was there. That addiction took hold before she really understood what was happening. Part of me wishes I could go back and shake the shit out of her… but I owe it to her to simply understand.

Now do you wanna see what is a cool photo? 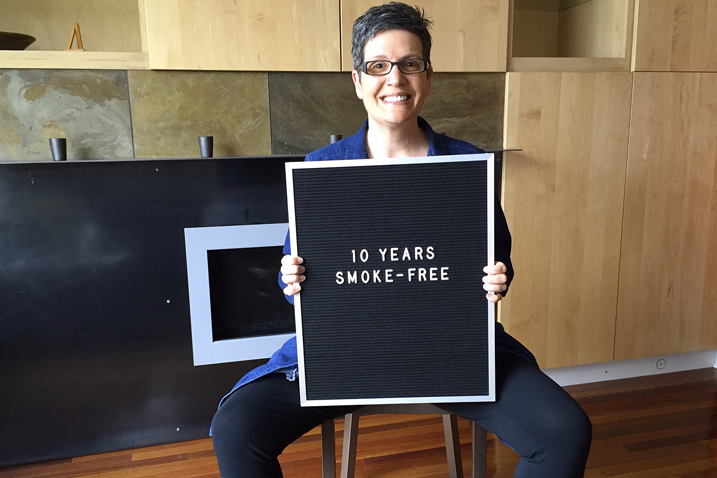 That’s what I’m talking about.