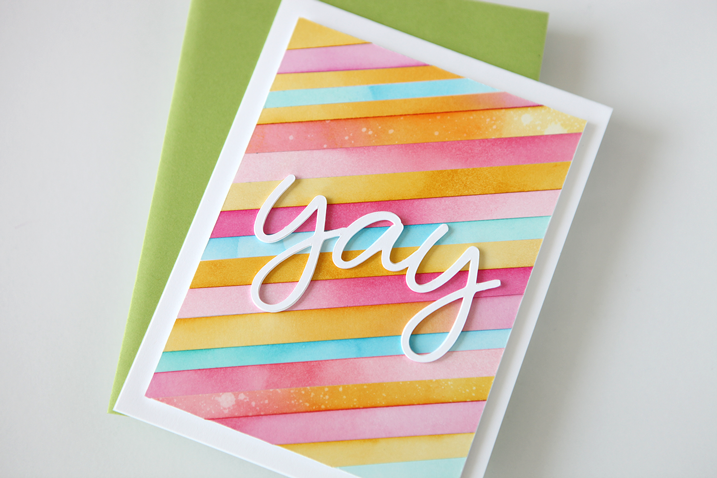 A few weeks back, while feverishly enjoying all the amazing card making YouTube videos that I find myself watching in the evening hours, I came across one from my Card Yoda Jennifer McGuire and I thought to myself, “Hey, doesn’t Dan have a paper shredder?” (Watch her tutorial and it’ll all make sense!)

I filed her tutorial away but didn’t take any action until last week when I glanced down in my recycled paper bin and saw a bunch of colorful, leftover frames from which I had cut out rectangle panels for other cards. 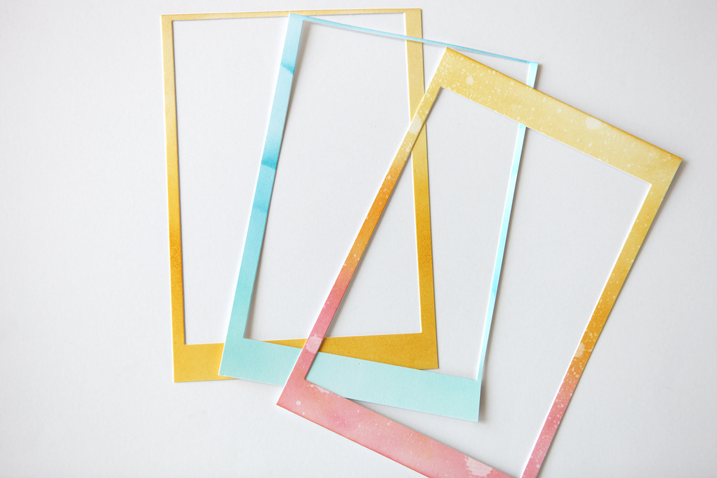 There were a bunch of ’em just sitting in there, looking all pretty but kind of like they were hoping to be invited to the card prom, you know what I’m saying? Most of these leftovers represent different versions of me blending Distress Inks and just playing around with that whole thing, so I thought, “JENNIFER’S VIDEO! SCRAPS!” and started cutting away using my Tonic Trimmer. I wasn’t too concerned with having the strips all be the same width and length. I just cut what I could and layed them all down on a 4.25 x 5.5 card stock panel, adhering them at an angle with adhesive. The colors all worked together really nicely. I love the little pops of blue that showed up and the bits of water splatter from misting some of my backgrounds with my handy dandy Distress Sprayer. Once the strips were all adhered, I trimmed the panel down and then mounted it onto a standard sized card base with a bit of Fun Foam using some double sided tape. Oh for cute! 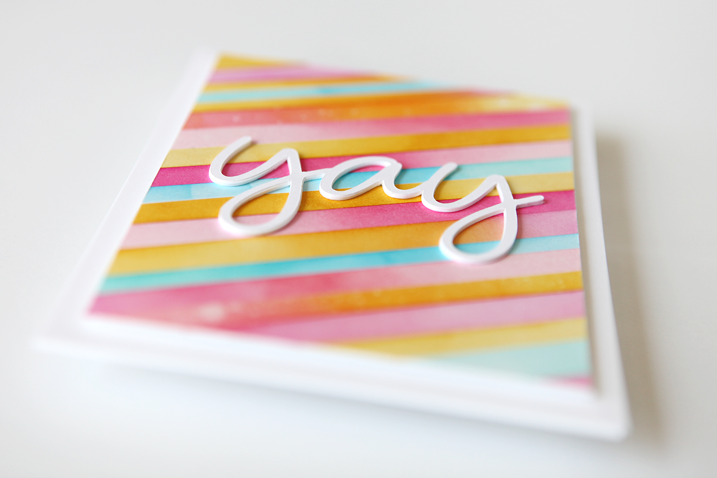 The title is five copies, stacked and glued together, of a die cut word (I used my Silhouette Cameo to make the sample here but this yay sentiment is coming to my collection at Simon Says Stamp in two sizes as a wafer thin metal die later this summer!) I love the bright colors, and the clean white title and card base on this card. I almost don’t want to send it to anyone because looking at it makes me happy. But I think it could make a really cute card for a baby shower I’m attending next month for my nephew and his wife. Nothing like a new baby to make you say, “Yay!”

And can I just say, that whole stacking die cuts thing? It is still the COOLEST thing I never knew that people did. It’ll work on scrapbook layouts, too. I love the new stuff I’ve learned in the past few months, and I have to say, Jennifer is a really good teacher of things.

If you have ever thought, “Hmmm. Cards… I don’t know,” check out both her YouTube channel but also her Online Card Classes site that she runs with fellow card phenom and artist Kristina Werner. Such good stuff and they bring in such good people to teach in their classes.

Thanks again to Jennifer for the idea. I love that your recycled bits can turn into unexpected loveliness.

SUPPLIES ON THE SCRAPS:

7 Comments on “Card Share: using scraps (after watching my guru)”