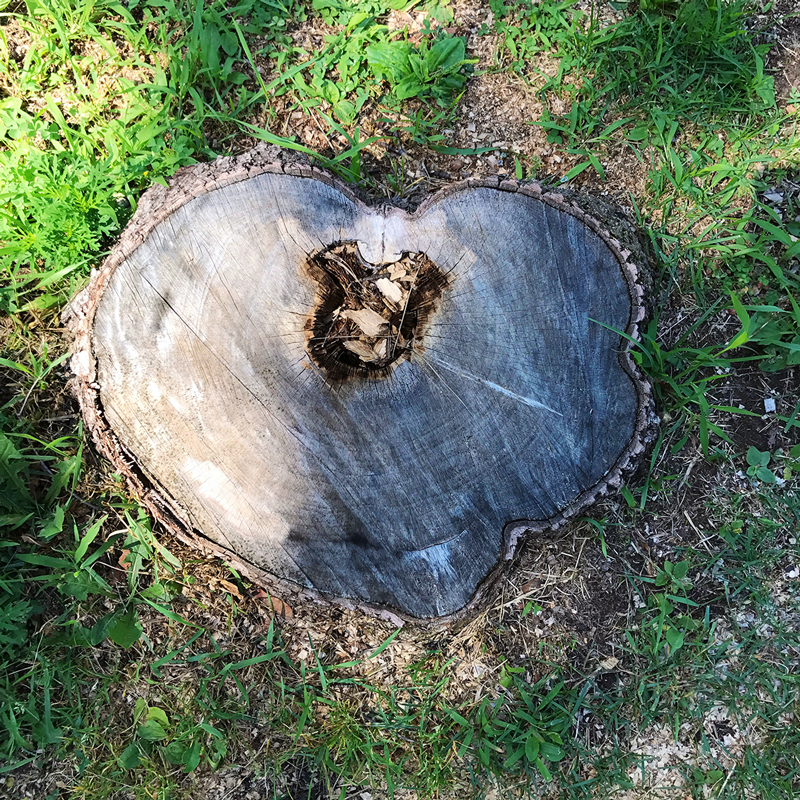 The other day I was on a walk, as I’m trying to work a bit less and move a bit more, and it felt like everywhere I looked, I saw hearts. From this tree stump to leaves on the ground, I was seeing hearts around my steps and for a second I thought to myself, “Well, thank you, Nature, for the comforting messages.”

Have you seen the movie Signs? There’s a scene where Mel Gibson’s character says to his brother, played by Joaquin Phoenix, “See what you have to ask yourself is what kind of person are you? Are you the kind that sees signs, that sees miracles? Or do you believe that people just get lucky? Or, look at the question this way: Is it possible that there are no coincidences?”

I was thinking about that on my walk, seeing all the hearts and realizing that there was a time in my life where I was looking for signs. I was looking for things outside of myself to provide some sort of direction, or affirmation, or sense of control over my life—something to help me figure out all of my shit. But the thing is, for much of my life, it was just an endless circle of dissatisfaction. Always hoping that at the end of the day, someone else was going to make it better. At the very least, there had to be something or someone I could blame for it.

Then I started therapy.

I feel like the statement—Then I started therapy—could either be a perfectly timed punch line or the last sentence of any chapter in a page-turner of a book. It implies that something you thought you knew might not have been built on the solid ground you’d banked on. It implies a bit of a good old-fashioned shake up.

I can attest to this unequivocally. All the things I thought I was so sure of have been shaken up and dumped out onto a somewhat liquified ground and I have spent the past six years figuring out how to regain my footing.

Things like, “I’m a passionate, high strung woman! To know me is to sign on for the ride of your life!”

The reality, however, is much less glowing. “I’m an immature woman-girl who is going to throw fits and act like a baby until everyone around her does her bidding.”

And that person I’m referring to was never really seen in public. I just saved her for the people who are closest to me. Especially Dan.

Which sounds so crazy typing it out, but it’s true.

I’ve changed a lot of things since starting therapy.

I’ve mentioned there are some stories that aren’t mine to tell… ones that involve my kids as they figure out who they are on this big blue spinning ball. But there are also stories I’ve realized that if I tell them, I don’t know if they will be as satisfying to read.

If I tell you that my number one goal right now in my life is to be responsible for everything (my actions, my pain, my emotions, just to name a few), it might not be as fun as hearing me piss and moan about having hot flashes and being chubby.

If I tell you that another goal of mine is to become much more invisible in life, so that I am able to actually SEE what is going on around me and connect to the fact that life is about SO much more than my small experience of it, I’m also not sure how that will resonate. And I realize this goal, the goal to be less in the forefront, might actually seem a little incongruent for someone who likes to go all in by singing slightly off key karaoke in her office on Instagram.

Just because I’m working on my personal development doesn’t mean I’m not having any fun.

And being invisible is not code for playing small. If anything, the more I learn about what life actually offers, the more I can offer to others. In other words, I can play bigger than was previously possible.

For a long time, I was a woman who would start talking before she even entered a room. It never occurred to me that I should walk in and listen first. Therapy, which really has been about personal development, has helped me to develop a spec of self awareness, and not the “I am one with the universe” feel-good crap that is so prevalent out there today. Part of my problem has been the inability to realize there are other people in the universe besides me. I would wager to say that isn’t just my problem. We are a planet of people who don’t want to see perspectives other than the ones we hold and fiercely protect.

Here’s one thing I’ve learned in therapy: we all want to find a way to feel good. Either about ourselves or life or whatever. And in doing so, you can do some really damaging stuff to get and keep that feeling.

But when I use the term ‘we’, my intention is not to lump the world in with my neurotic behaviors. I’m just sharing something personal that I’m working on.

Part of why I haven’t been writing about this stuff is that the more I know, the less I am knowing. And that is both life changing and humbling at the same time.

That’s a line from a Cloud Cult song actually, and Dan used to quote it all the time and when he did, I just thought he was being pretentious. But today, it’s actually helping me to understand a lot of the reasons why I’m sharing less personal stuff here. The more I learn, the more I realize how little I can truly speak with authority on. Not knowing everything can really shake a person up. That makes me feel very vulnerable. I am learning that I have a lot to learn and right now, that’s presently my top goal.

That and paying the bills.

So if you see more here on the crafty stuff (that I’m seriously having so much fun with), it might feel less personal, but know this: the woman behind the curtain is working her little tushka off to be a better human.

I still have hot flashes every day, and I’m also chubby.

In case you were wondering.