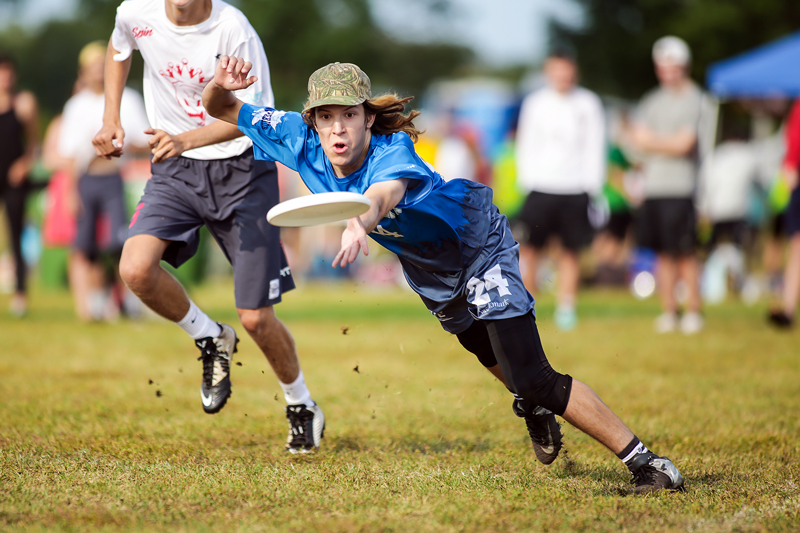 Yesterday wrapped up the 2017 Youth Club Championships (YCC) of ultimate at the fantastic National Sports Center in Blaine, MN. The YCC event brings the best youth ultimate players from around the country to compete for three days. Cole plays in the U20 boys division. The other divisions include: U20 girls, U17 girls and boys and U20 mixed, where female and male players are on the same team.

For those of you who’ve followed along with me all these years, you know that my kids both play the sport and that occasionally I’ll rent a big assed lens to take photos of them playing it.  This year is the first year I left my camera at home, choosing instead to spectate and volunteer. 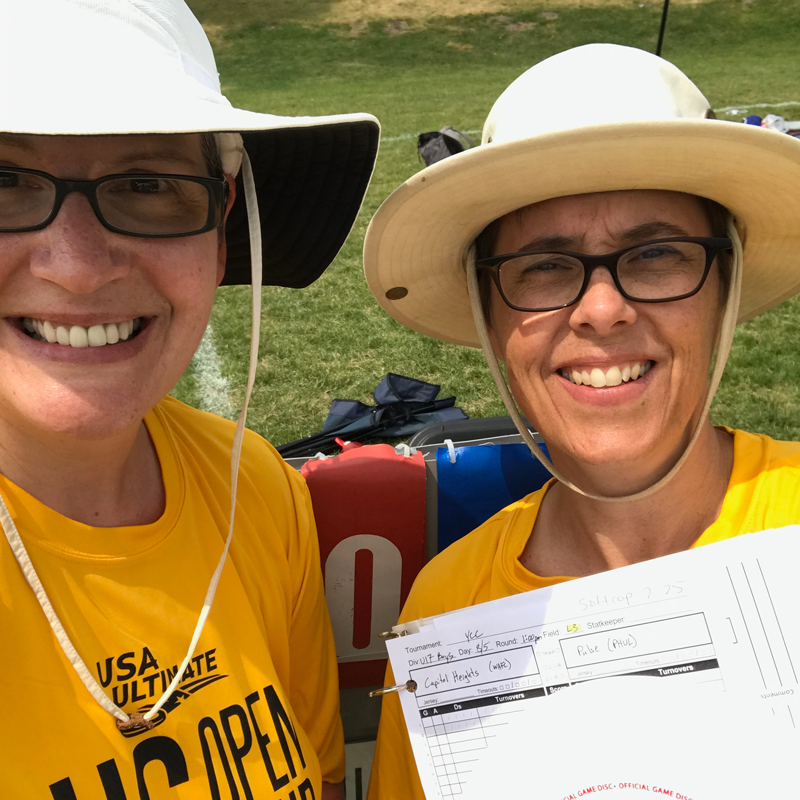 That’s me and another ultimate parent from Cole’s high school, Monica, who took me under her wing as a volunteer scorekeeper. While I only scored two games, I have a new appreciation for all those people who stand on the sidelines recording every goal, assist, turnover and defensive move that caused the turnover. I was spent after two games, and come on! I wasn’t doing anything but pacing the sideline and muttering aloud to make sure I was following the action to the letter. 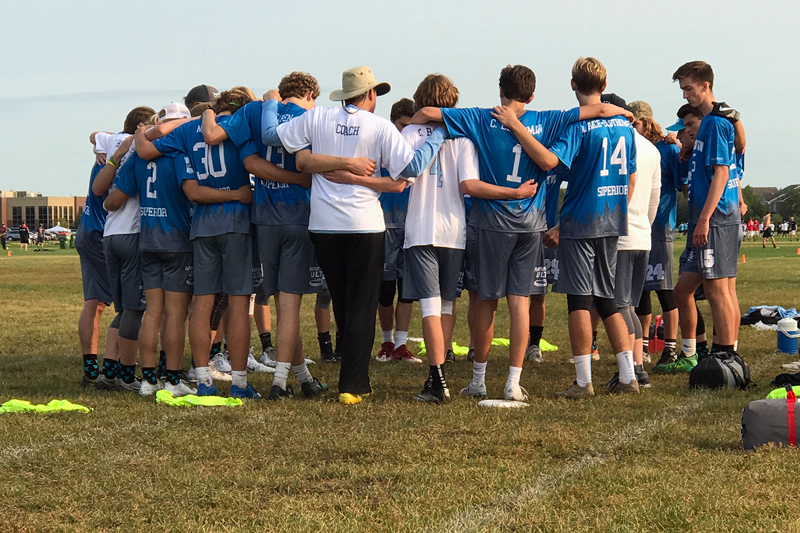 The Minnesota Superior U20 boys didn’t win a single game. They played SO much better than that sounds. The competition at this tournament is fierce. The talent is ridiculous. It just wasn’t the year for these boys to come out where they would have liked to in the overall standings.

Still, while I know my son is disappointed, I also know he loved the opportunity to play with this group of young men who represent some of the best players from our region. Sometimes winning isn’t actually everything. It doesn’t mean it doesn’t suck to lose, but experience counts for something.

Ultimate has something that feels special. It feels different from other sports. I’ve tried to capture it through photos and words but I am only coming at it from a mom’s perspective and that’s not the same as being a player. 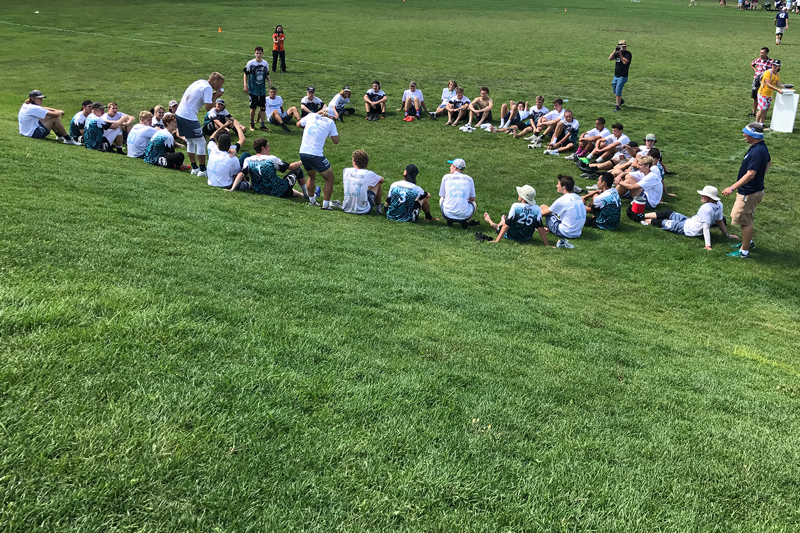 There is a tradition in ultimate after each game where the two teams circle up into what is called a Spirt Circle. It’s one of my favorite things to witness. You’ve just finished 90 or more minutes of some of the fiercest, hardest game play, where calls are contested, bodies are flying through the air in defensive and offensive bids, and players are putting everything they have into the game, and yet you circle up and give respect to your opponents and remember why you love playing this game.

The thing that is so cool about this and ultimate in general, and this is coming from my perspective as a parent, is that my kids do this because they love it. They wouldn’t do it if they didn’t. I had no hand in pushing them into this sport or any other. This is all about them and their respective communities. 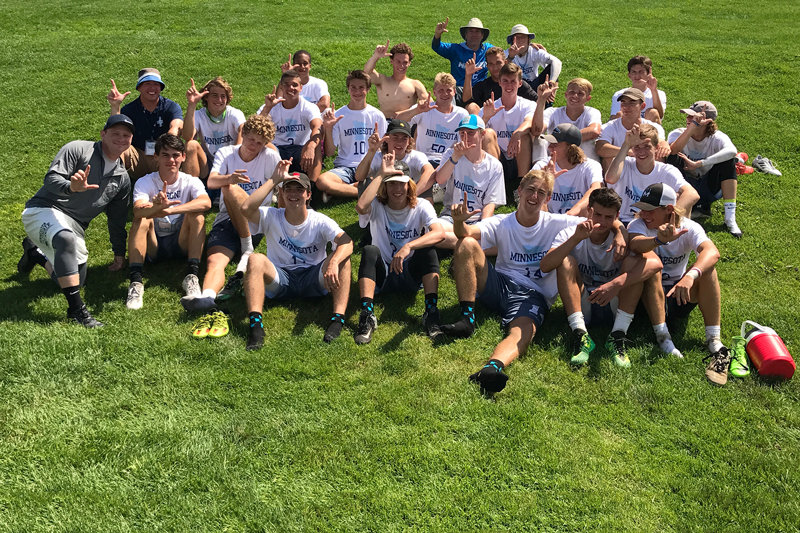 U20 boys team picture, where they all held up “Ls” to cap off their 0-7 weekend record.

There was a moment on Saturday afternoon where our boys team was on a break so I was catching our U20 Mixed Team’s game. I was sitting under a shady tree on the grass, watching them kind of crush the game and even though it wasn’t even my kid out there playing, I found myself getting a little weepy.

Getting to watch this sport is a gift. Getting to see your kids have a passion for something—whatever that passion may be—is also a gift.

These days are finite, so for the ones I have where I get to bear witness to all of this, I am so grateful.

Cole has one more year of high school.

Aidan has one more year of college.

That doesn’t mean ultimate is ending anytime soon, but it does remind me how fast all of this time is moving.

I’m just full of gratitude for getting to come along for the ride.

I count myself lucky to be an ultimate mom.

Thank you to everyone at Minnesota Ultimate for putting on such a fantastic event. We love having the YCC here, and now the ICC as well!