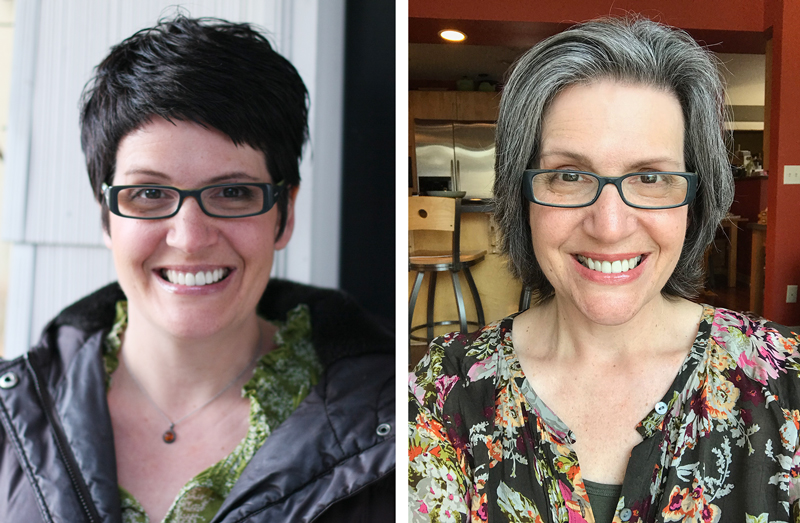 I suppose it’s bound to happen on the cusp of a new decade—the inevitable hashtag that encourages to you compare the past 10 years. What can I say? I’m a #decacdechallenge sucker.

I thought it would be fun to see what comparisons I could draw between 2009 and 2019. And so I present a list of 10 Things I’ve Learned or Changed in This Past Decade, which I imagine will eventually be referred to as The Teens. (For the record, the 2000s are literally one big chunk to me… but I digress…)

1—I used to dye the shit out of my hair. I say that with zero regret. With every short cut, I would stop off at Target and pick up a nice bottle of Miss Clairol Dark Chocolate No. Something and wash that gray right outta my hair. The last time I dyed my hair was in 2016 when I accidentally bought a bottle of blue black and sported an otherworldly blue tinge you’d see in just the right light. It made me realize that I actually liked the light and dark interplay created by the gray and since that time, I’ve just let it go. Some people love it. Some people wonder why I’m not coloring it any more. Me? I think it’s looks really good and truth be told, that’s kind of what matters. It’s ALL good.

2—I am a different person thanks to therapy. In November of 2009, I was moving closer to becoming more of a neurotic hot mess than ever. Sure, from outside perspectives, I might have seemed like a woman who had it all together. I assure you, I did not. Even though the following year found me taking up running and getting into shape, it wasn’t until early 2011 when I decided to do a little work on the inside. It started out as me and Dan wanting to improve our marriage. Funny how I thought that was the No. 1 thing I would get out of therapy. (Well, mostly that I could blame him for all of our problems!) It’s nine years later and I’m still learning that I have to take responsibility for my own issues and figure out how to offer love to others. Suffice to say, I like the me of 2019 much more than the me of 2009. She’s better at a lot of interpersonal things and she’s still up for the work.

3—My children are not children anymore. In November 2009, I had a 13-year-old daughter and a 10-year-old son. And while some things have gotten easier in the parenting department, some things have not, in the sense that when you think you have a good read on something, life will show you again and again that the current is unpredictable. This is part of therapy, too. I need to figure out what they need from me and it is always changing. It is a wild ride that I was in no way qualified for at the start, but I’m learning more and more and am grateful for the opportunity to do so.

4—My husband used to run a coffee shop. Today, Dan is entering his fourth year as an elementary school teacher. I told him recently in all honestly that I’m so grateful that his mid life crisis was reflected in going back to school and changing careers, as opposed to something nutty like having an affair or buying an inappropriate sports car. But it’s not easy work for him. What respect I had for teachers before has exploded in this modern era. He works ridiculously hard and cares deeply for his students. He also had more free time a decade ago. It’s not always the best thing for our relationship, if I’m being honest, because if he works, then figure, I might as well work, too. It’s a balancing act that we are figuring out. We are in danger of working more on work than on us. Wish us luck.

5—For the love of all things holy, I need new glasses.

6—I was finding my way professionally in 2009. It was a crazy year for work a decade ago. My illustrious career at Simple Scrapbooks magazine had come to an end with the demise of CK Media and I was moving forward with my friend Stacy Julian, developing classes for the original Big Picture Classes. It was the hay day of online scrapbooking classes. I still cannot believe that there were over 1,200 people who signed up for my first online class. If you were one of them, thank you. You helped me to stay in the craft industry and for that, I am eternally grateful.

7—I still had my period in 2009. Sometimes we are uncomfortable with words like period or menopause. It doesn’t make for polite conversation, right? But it IS a big deal. I mean, The Change brings with it, well, changes. A decade ago I had no idea what a hot flash was. In 2019, I have multiple each day and have for six years running. Another unexpected less-than-stellar side effect? Chin hair. But the upside? No period. I’d like to talk more about menopause in the coming months. Or not. I’ll think on that.

8—I make cards now. That might seem like a funny thing to include but getting into the card world has changed my professional life. And that’s a good thing because if you refer to No. 3 on this list, it complicates the whole “I tell stories” for a living angle of my business. My kids’ lives are their own. What they are doing should be private. I only share the broadest of strokes where they are concerned. But cards? No approval is needed, friends, and I’m quite possibly the craftiest I’ve ever been. Who knew heat embossing was fun? In 2019, I’m raising my hand.

9—I have about the same amount of wrinkles. What can I say? I avoid the sun like a vampire. And not beacause I’m sparkly.

10—I have more to offer today. I’ve had some people say that I seem like I have more life… or a glow… or that I exude a level of joy. To that, I will say this: I think that I do, but it’s not without a price. The price is that I have fewer absolutes than I had a decade ago. The things I thought I knew about life and how to live it have changed quite a bit. I really am trying to be in harmony with life and what life offers. I’m working on dropping my judgements and ideas and connecting to what is real and needed. This process, while not easy for me, is actually changing who I am. I think that is the glow. That is the energy. And you know what? I’ll take it.

So that’s my #decadechallenge. If you were to pick one thing from your decade—something of change, growth, loss, life or learning—what would yours be?